In a statement, Interior Health says it's aware of the incident and is looking into it.
Feb 9, 2021 10:00 AM By: Jon Manchester / Castanet 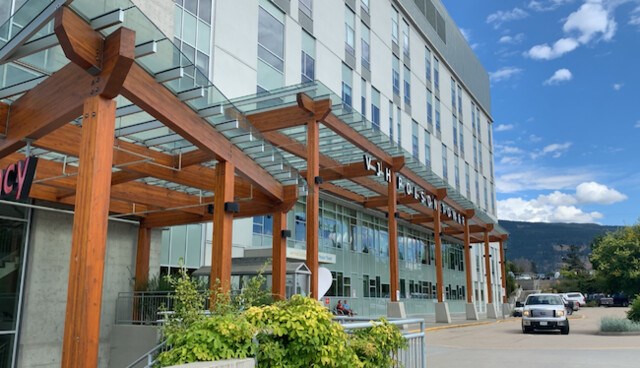 The man recorded one of the incidents at Vernon Jubilee Hospital and posted it to social media.Photo by Jon Manchester

A Vernon man and double lung transplant survivor was denied service at Vernon Jubilee Hospital (VJH), not once but twice on Sunday.

Ryan Bentson says he was thrown to the floor by security guards at VJH as he showed up for a scheduled appointment.

At issue, the face shield he was wearing.

Bentson says he informed staff he has a medical exemption for wearing a face mask, but still wants to protect himself the best he can with the shield.

He had shown up for his yearly checkup after receiving the lung transplant 10 years ago, and says he regularly goes to the hospital for other tests, as often as every month ... "and I've never had a problem."

"I was told if I wasn't going to wear a mask, I'd have to leave," Bentson said Monday.

Security was called, and "when they said they would escort me out and grabbed my arm, I flinched a bit and got taken down by three guards."

They landed on top of Bentson in a heap on the floor.

Bentson, who has only 50% lung capacity and is immune suppressed, says wearing a cloth face mask makes it difficult for him to breathe.

After his first interaction Sunday afternoon, Bentson told the hospital staff he had a CT scan scheduled for that evening. He was told if he returned, he would be arrested.

That came to pass when he came back. This time, Bentson recorded the interaction on video.

He can be heard explaining his medical condition and reasons for not wearing a mask, but staff deny him entry before police show up and grab his phone as the video abruptly ends.

Bentson says he was handcuffed and given two $230 fines before being driven home by the police officer.

He says he has called his respirologist seeking a written exemption to the mask rule, but was told by his transplant doctors "there was too much of a liability issue for them to sign anything."

Not only did Bentson not end up getting his test, but he was also told if he shows up at the hospital again without a mask, he will be arrested and taken to the RCMP lockup. He's also had to cancel another upcoming pulmonary test.

He's seeking a lawyer interested in taking on his case.

"I feel it's really unfair," he said. "All I wanted was to get a simple test that I get every year, and it turned into a big deal."

He says the whole ordeal left him shocked.

"It was quite traumatic ... I've never had that happen in my life," he said.

Castanet has reached out to Interior Health and Vernon RCMP for comment.

An IH spokesperson said staff are aware of the incident and are looking into it.

"Interior Health can confirm that RCMP were called to VJH on Sunday afternoon.

"While we cannot speak to specifics, we have an obligation to provide a safe and harassment-free environment for our staff, physicians, patients and families, including assuring all individuals follow COVID-19 protocols," the health authority said in an email.

"Our priority is to ensure all patients receive the services they need at VJH, but individuals may be asked to leave if they are not being respectful or creating a risk to hospital staff. Security and RCMP may be involved in these situations."

This new UBC study reveals which materials make the most effective face masks
Feb 7, 2021 6:30 AM