California woman says she drowned children to protect them

LOS ANGELES — A California woman admitted to drowning her three young children because, she said in a jailhouse television interview, it would keep them away from their father amid a bitter custody battle.
Apr 16, 2021 2:47 PM By: The Canadian Press 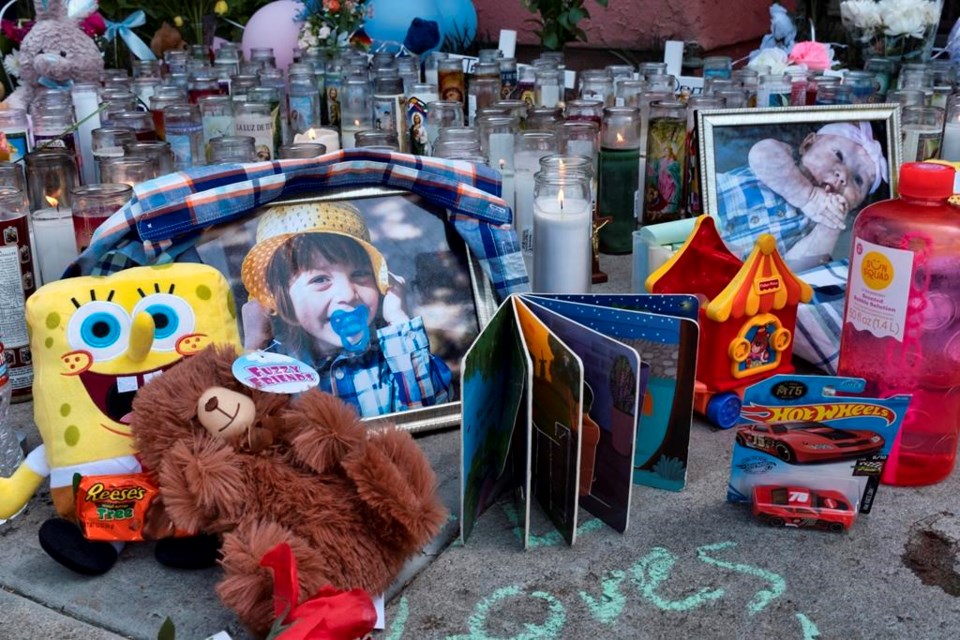 LOS ANGELES — A California woman admitted to drowning her three young children because, she said in a jailhouse television interview, it would keep them away from their father amid a bitter custody battle.

Liliana Carrillo told KGET-TV that she wanted to “protect” her kids — 3-year-old Joanna Denton Carrillo, her 2-year-old brother, Terry, and 6-month-old sister, Sierra — from abuse, the station reported. Carrillo has not yet been charged in the children's deaths in Los Angeles, and the investigation remains ongoing.

“I drowned them,” she said in the Thursday interview at the Lerdo Pre-Trial Facility in Kern County.

“I did it as softly, I don’t know how to explain it, but I hugged them and I kissed them and I was apologizing the whole time,” she said. “I loved my kids.”

Carrillo’s children were found dead Saturday by their maternal grandmother in her apartment in the Reseda of Los Angeles. Carrillo was arrested later that day in Tulare County, nearly 200 miles (322 ) north of the scene.

“I know that I’m going to be in jail for the rest of my life. It’s something I’ve come to terms with,” she said in the TV interview.

Carrillo told the television station that she had driven north in an attempt to drive off a cliff and kill herself but the car became stuck in a ditch and she instead took the vehicle of some people who had stopped to help her. She has been charged in the carjacking — an she admitted to in the TV interview — but she had pleaded not guilty to the charges during her arraignment Wednesday in Kern County.

The children's deaths were preceded by a hostile custody battle between Carrillo and their father and her ex-boyfriend, Erik Denton. Denton wrote in court papers that Carrillo had taken the kids and refused to tell him where they were.

Fearful for the kids' safety, Denton filed for custody on March 1. He contended in court papers that Carrillo was increasingly delusional and that the children should not be with her. Carrillo, in turn, filed a restraining order against him and claimed Denton was an alcoholic who may have sexually abused their eldest child.

Denton did not respond to a Facebook message from an Associated Press reporter on Friday to address the abuse claims, although it appeared that he had read the AP's request for comment.

“I am very concerned about my partner,” Denton wrote in the custody documents, “and want to get her the help she needs to recover from this mental break and to become stable. I want her interactions with the children to be safe and healthy.”

Carrillo, who wore a brown jail jumpsuit, had her arms shackled to her waist. There was a cast or bandage on her left arm. She cried several times during the nearly half-hour interview in which she said she did not have an attorney.

However, a spokesman for the Kern County District Attorney's Office said a public defender had been appointed to represent her during her arraignment. The public defender's office did not return a request for comment Friday.

Carrillo described herself in the interview as a “social justice warrior” who used to travel California advocating against human trafficking. She said she met the children’s father when she was his Uber driver and they began talking during a long drive.

Carrillo told the TV station that she had promised her children when they were born that she would protect them and did not want them to be further abused.

“I wish my kids were alive, yes,” she said. “Do I wish that I didn’t have to do that? Yes. But I prefer them not being tortured and abused on a regular basis for for the rest of their lives.”

Denton’s court filings tell of Carrillo’s post-partum depression following the birth of their middle child. She began therapy but quit. She self-medicated with marijuana, he claimed. In texts and social media posts, she said things like “I wish I never had kids” and threatened to kill herself.

Carrillo also believed she was “solely responsible” for the coronavirus pandemic, Denton wrote, and she thought that the small California city of Porterville — where the family had lived until the end of February — was home to a “giant sex trafficking ring.”

During an outing last February at a park, the couple's oldest daughter fell and landed on her groin area and later said it hurt, according to court documents filed in the custody case. Carrillo believed the pain was from Denton molesting her, a claim he denied, the documents said.

He said she was checked by a doctor who found no evidence of abuse, but Carrillo contended that the examination wasn’t thorough enough, the court documents said.

In her interview, Carrillo said she had dealt with depression, anxiety and post traumatic stress syndrome her entire life and had sought out a therapist for post-partum depression but contended that it was Denton who posed a threat to the children.

Carrillo alleged that her daughter and a son had shown signs of abuse and that she had tried but failed to obtain help through social workers and law enforcement.

“They were just going to hand them off to the dad,” she said.

Carrillo sought a temporary restraining order in Los Angeles County. Through the courts, Denton and Carrillo agreed to swap Denton’s days to see the children — a few hours every other Sunday.

Last Sunday was supposed to be just his second visit with the kids under the new schedule.

Asked about her final message to her children, she replied: “I love you, and I’m sorry.”

Five things to watch for in the Canadian business world in the coming week
May 9, 2021 7:00 AM