‘Just put on your mask and get off’: Maskless man confronted on Vancouver bus (VIDEO) 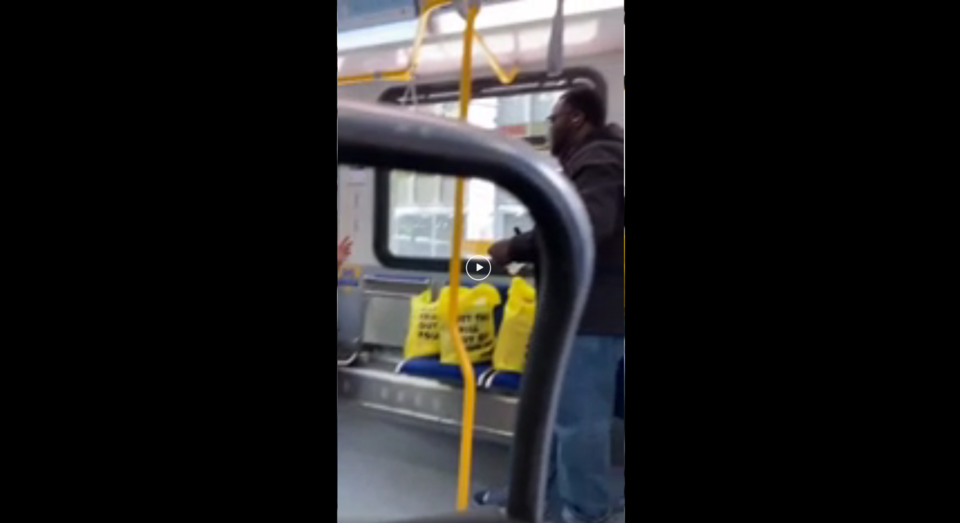 A confrontation over mask-wearing took place recently on Vancouver transit.4istheanswer/Reddit

A video of a confrontation over mask wearing on a Vancouver bus has made waves online and raised questions about mandatory mask enforcement.

The video starts with a seated masked man shouting at another unmasked man. The unmasked man divides his attention between the man yelling at him and is packing his bags which are sitting across two seats along the wall of the bus.

Someone else on the bus tells the masked man he has made his point but he tells them to “stay out of it” multiple times. Another voice also asks if there is going to be any attempt to de escalate the situation which falls of deaf ears.

Just before the video ends the masked man directs his attention to the bus driver as if to ask him what he is supposed to do about the situation. So far the video has received 205 upvotes and nearly 150 comments which narrowed in on the lack of Transit Police presence during the situation.

“The transit system is over 1800 km2. Therefore, our enforcement is targeted and Transit Police officers are deployed strategically based on where crime statistics, intelligence reports and information from the public tells us that there are significant ongoing problems,” the post reads.

“The amount of complaints we get about masks far exceeds our resources, so many of them go without a response, which is something that frustrates all of us. However, if you take the time to report the problem, we'll take the route/time of day/etc into consideration when planning our targeted enforcement, so please keep letting us know where the problems are," the post continues.

We are down at Stadium Chinatown Station to provide safety tips riding o. Transit. We are translating into multiple languages. Everyone should know the safety features on Transit. Come on down and visit @TransitPolice @CstSHanif @SgtCSimpkin @WaterfrontCPC @CstJPonsioen pic.twitter.com/CprE6TzMYI

Sgt. Clint Hampton with Metro Vancouver Transit Police says it is always better to report people not wearing masks to Transit Police rather than the public taking on the task.

“They are potentially putting themselves at risk by trying to enforce mandatory masks in public,”  Hampton said adding “There are legitimate exemptions to the mandatory masks as well so they have to be aware of that."

An outdated policy stated Metro Vancouver Transit Police would focus on education rather than enforcement.

The policy has since been updated to say Transit Police are enforcing the November Provincial Health Order under which fines up to $230 can be issued to those not wearing a mask subject to exemptions. The PHO includes all transit vehicles, which covers all modes of transit, as well as bus shelters, and stations and platforms of SkyTrain, Canada Line, SeaBus and the West Coast Express.