COLUMBUS, Ohio — Warming up a crowd with a joke is a trick of the political trade. Republican Ohio Lt. Gov. Jon Husted had, no doubt, used the technique successfully dozens of times before. But one day last September, it was going very badly.
Apr 8, 2021 10:55 AM By: Canadian Press 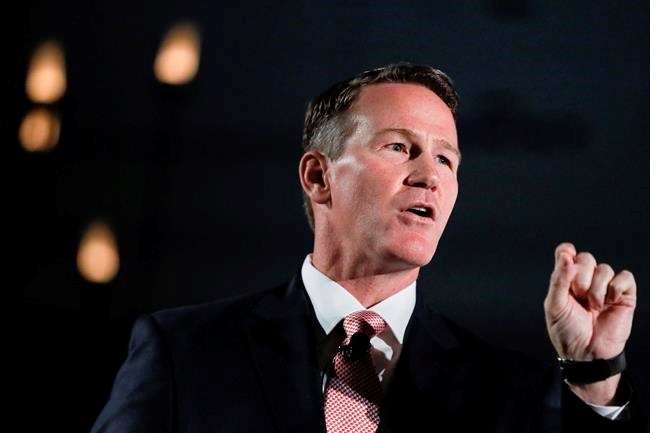 COLUMBUS, Ohio — Warming up a crowd with a joke is a trick of the political trade. Republican Ohio Lt. Gov. Jon Husted had, no doubt, used the technique successfully dozens of times before.

But one day last September, it was going very badly.

Husted, 53, was back in southwest Ohio, where he had spent decades as a college football star, business professional and state lawmaker, to kick off a campaign rally for President Donald Trump. His joke was an attempt to promote mask-wearing. Not only did the crowd not laugh, they booed.

“All right, I get it,” he finally said, awkwardly ending his joke about those forced to wear masks in grocery stores being able to "at least say that you're trying to save the country” by wearing a Trump 2020-themed face covering. Even though he was there to promote the work he and Republican Gov. Mike DeWine were doing to elect Trump, someone heckled: “Get off the stage.”

It was a seminal moment for Husted, the right-hand man to a governor who has caught grief from the Trump wing of the party for Ohio's COVID-19 restrictions.

Facing such reception, Husted has increasingly used provocative rhetoric on social media — punctuated most recently by a tweet using the phrase “Wuhan Virus,” decried by health experts and Asian Americans as inflammatory — even as he presents a moderate tone in regular coronavirus briefings.

Husted started 2020 as a rising Republican star. Following an uninterrupted two-decade climb from state representative to House speaker to state senator to secretary of state and, now, lieutenant governor, his next stop is supposed to be the governor's residence.

But his party's hard turn to the right — including, for many, a deep hatred of COVID-19 restrictions — has required deft recalculation.

University of Cincinnati political scientist David Niven said Husted is trying to win the approval of the state and national Republican base without alienating more moderate Republicans and independents who have supported him in the past.

“I think the single most important fact in this whole story is that Husted attended and spoke at Trump rallies last fall and was booed,” Niven said. “You don’t need anything more than that to know that the most excited, active members of the Republican Party are skeptical about DeWine and Husted.”

Husted has spent the past year standing beside DeWine, the 74-year-old governor initially showered with bipartisan praise and then pilloried by fellow Republicans for his aggressive pandemic response. As DeWine's technology chief, he has outlined ambitious plans like expanding broadband access and making technology credits available to young people.

He uses the platform for standard partisan fare, but also to elevate more extreme views. Husted can be found there pushing GOP narratives that DeWine has steered clear of, declaring “cancel culture” as an impediment to free speech and even retweeting attacks on virus restrictions his own administration, including former health director Dr. Amy Acton, promotes.

“This is someone who has stood up for over a year now with the governor and with Dr. Acton and others not using this language, so it’s almost politically incomprehensible now why he would not only use this language but then defend its use,” said Karen Beckwith, a political science professor at Case Western Reserve University.

Beckwith and Niven believe his online is part of a larger pattern of political to a very specific subset of the GOP.

“His political future is so inextricably tied to Mike DeWine right now, and that presents a couple of challenges for him," Niven said. "One of which is DeWine might ultimately walk off into the sunset and Husted needs to be ready immediately to make his next move.”

After his “Wuhan Virus” tweet, more than 80 Asian American members of the Columbus suburb where Husted lives penned a letter to him that said his “choice of words has only raised the anxiety and fear” they face.

Husted has dug in his heels, saying he was aiming to criticize the Chinese government and its role in spreading COVID-19. Still, he and family members are scheduled to meet privately with some of the letter's signatories Friday.

Former Democratic Gov. Ted Strickland, who worked closely with Husted to pass a bipartisan budget in 2007, joined those calling on Husted to publicly apologize.

“He knew exactly what he was doing, and he was doing it to try to curry with right-wingers,” Strickland said last week on WWGH's “The Early Show.”

Ohio Senate Democrats issued a joint statement calling on him to "listen to his Asian American and apologize.”

Republicans are pressuring Husted to stand his ground. An op-ed by Cincinnati entrepreneur Vivek Ramaswamy that was recirculated by the Ohio Republican Party urged Husted not to say he is sorry, saying it would “reinforce the false and offensive idea that Asian Americans are connected to the actions of the Chinese Communist Party.” Ramaswamy is the son of Indian immigrants and a former COVID-19 adviser to the DeWine administration.

Niven said Husted — whose history includes working with Democrats to craft budgets, advocating for an end to gerrymandering that's benefited the GOP and, as an adoptee, fighting for foster care improvements — now must decide whether aligning with Republican moderates like DeWine and former Gov. John Kasich is still politically prudent in a state Trump overwhelmingly won twice.

Farnoush Amiri is a corps member for The Associated Press/Report for America Statehouse News Initiative. Report for America is a national service program that places journalists in local newsrooms to report on undercovered issues.