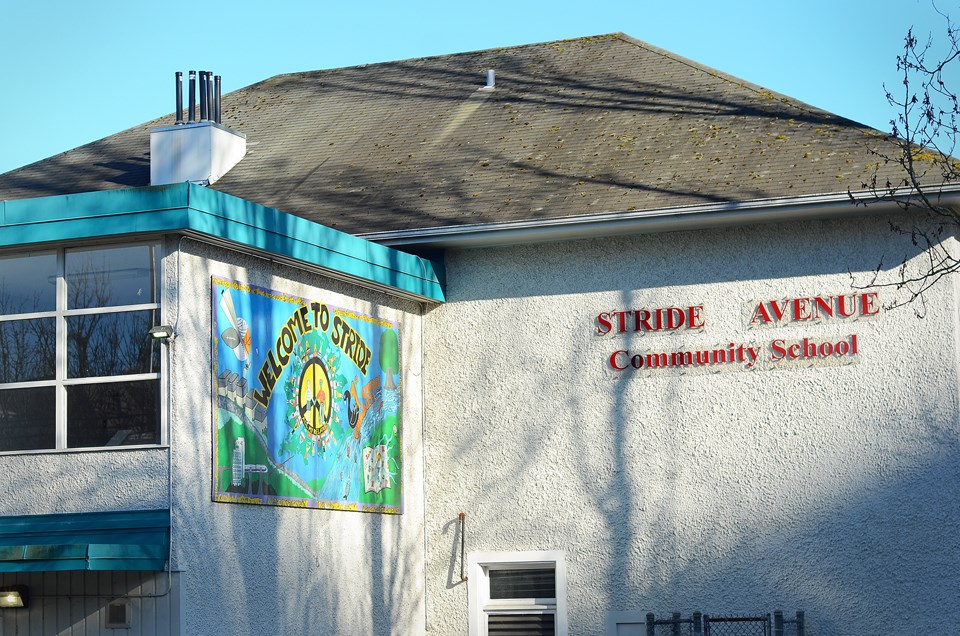 Stride Community School, parts of which were built in 1924, is being replaced by a new $22.3-million school.Cornelia Naylor

Real dollars have been approved to replace a Burnaby elementary school assessed for years as at “highest risk of widespread damage or structural failure” in an earthquake.

The province announced this week that Stride Avenue Community School, parts of which were built in 1924, will be replaced with a new $22.3-million, 415-student school by 2024.

Besides being seismically safe, the school will be built to meet the highest energy efficiency standards – using electricity instead of natural gas and including solar panels as well as more energy efficient insulation, heating and ventilation components, according to a government press release Monday.

Construction of the new school, which will be built on open space at the existing property, is expected to begin in 2023, the release said.

Students will keep attending the old school until it’s finished.

The project is part of the province’s work to upgrade and replace high-risk schools through its Seismic Mitigation Program.

All local schools built before 1992 have been assessed to see how well they would stand up to “the big one” – a catastrophic quake predicted by geologists when pressure built up between the Juan de Fuca and North American tectonic plates for the last 300 years suddenly releases.

Stride was one of 24 Burnaby schools originally deemed to be at high or moderate-high risk of damage during a major quake.

The two-storey classroom block built in 1969 is rated “high 1,” indicating it is a “most vulnerable structure, at highest risk of widespread damage or structural failure,” according to the province's risk-rating scale.

The gym, a one-storey classroom block and another two-storey classroom block (built in 1969, 1949 and 1924 respectively), have earned a “medium” risk rating, indicating they would sustain “isolated damage to building elements” and that non-structural elements, like bookshelves and lighting would be “at risk of failure.”

The school’s replacement seemed imminent eight years ago, after a funding announcement by then-Premier Christy Clark in April 2013 – one month before her BC Liberals won that year's provincial election.

“Absolutely nothing is more important than keeping our kids safe,” Clark said in the release.

At an announcement of $79 million in funding for a new Burnaby North Secondary School in October 2018, Fleming said, “(The BC Liberal government) didn’t, unfortunately, as we discovered when we transitioned into office, have any plans or funding in place or any work behind them, and that certainly was not fair to Burnaby families who expected action and got very very little.”

The Burnaby school district didn’t actually get permission to develop a detailed business case for the Stride project until March 2017 (shortly before the next provincial election), according to secretary-treasurer Russell Horswill.

And final approval for the project took three more years under the NDP.

With the formal funding agreement finally signed, the district is now in the process of hiring an architect and consultants to design the new Stride.

That process will likely take nine or 10 months, according to Horswill.