Femicides increased in Canada during the COVID-19 pandemic

Isolation is key to slowing the spread of COVID-19 — but lockdown measures had debilitating repercussions for many women over the last year.

While it can be difficult to live alone, living with a partner under isolation poses a number of challenges. Any issues that existed prior to the pandemic may be exacerbated and new ones may also arise.

In cases of domestic violence, isolation can result in increased emotional and physical harm and even in death. In 2020, Angela Marie MacDougall, Executive Director at Battered Women's Support Services (BWSS), told Vancouver Is Awesome that the BWSS Crisis Line saw a staggering 300 per cent increase in calls.

And while the BWSS isn't seeing the same number of calls that it was at the onset of the pandemic, MacDougall says they remain high. Additionally, the pandemic has heightened the issues survivors face in escaping violence.

Tragically, she adds, one of the ways to measure the impact of the pandemic on women is fatalities.

Femicide on the rise in Canada

Despite gradual relief from the COVID-19 health crisis, what remains and continues to rage across the country is domestic violence and femicide — the intentional killing of women.

The Canadian Femicide Observatory for Justice & Accountability (CFOJA) is reporting a staggering 92 women killed by violence in Canada in the first half of 2021. Of the 92 femicides, 79 of the accused were men.

In its third annual #callitfemcide report, the CFOJA focused on women and girls killed by violence between Jan. 1 and Dec. 31, 2020. Of the160 femicides it reported, 128 of them involved a male accused.

In the previous year's report, 146 women and girls were killed by violence, which marks nearly a ten per cent increase in femicides. In fact, prior to the pandemic, femicides had decreased each year since 2017.

The 2020 report also notes that one in five women who were killed by a male accused were Indigenous. This means that Indigenous women and girls made up 23 percent of the femicides Canada-wide despite making up less than 5 per cent of the population, according to the latest data from Statistics Canada.

MacDougall attributes the rise in femicides to pandemic-related factors including increased isolation and economic instability. But she adds that the federal government needs to act quickly to prevent further violence. 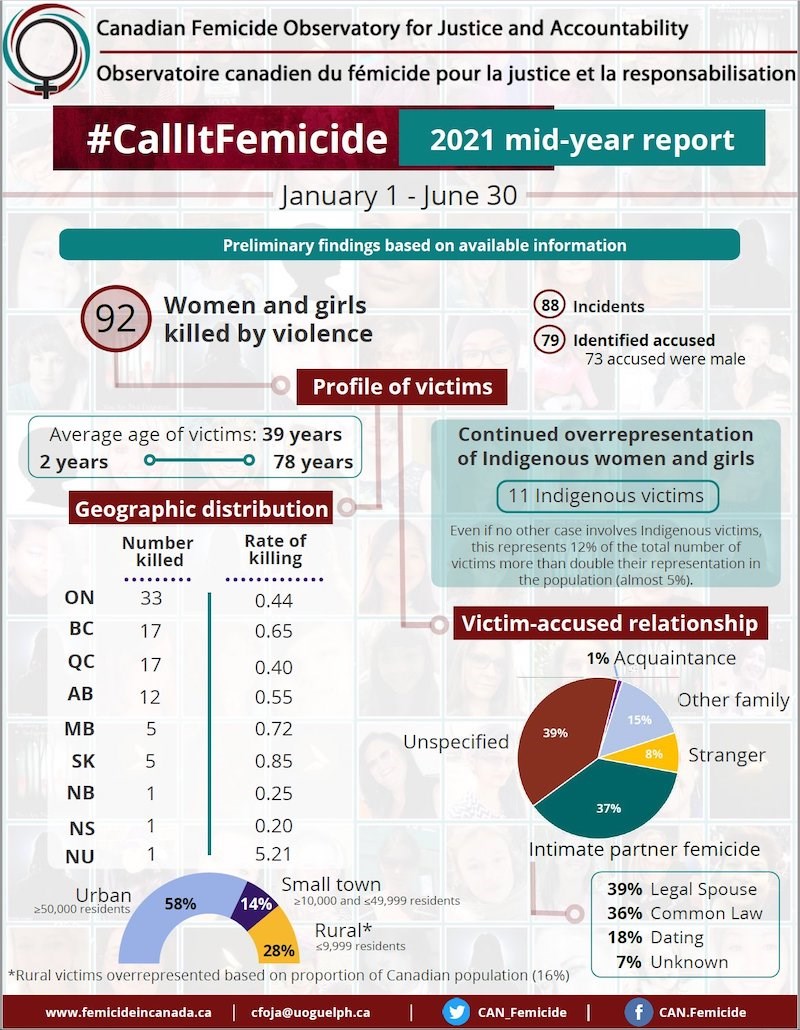 The BWSS was part of an expert group to develop the framework and content of Canada’s first National Action Plan on Gender-Based Violence, delivered to the government.

The Report to Guide the Implementation of a National Action Plan (NAP) on Violence Against Women and Gender-Based Violence is a 10-year plan that provides a "framework for prevention," says MacDougall.

To implement the plan, the government needs to invest "billions, not millions" — but it will save lives, she adds.

"When victims have access to a frontline organization the fatalities go down," she explains, noting that most survivors report to a family member or a community organization rather than the police. "Between 10 and 20 per cent of survivors contact the police."

In addition to prevention, the NAP is a roadmap to build support for survivors and families as well as policies that reflect and respond to the lived realities of women facing violence.

Learn more about the National Action Plan on Gender-Based Violence.

A feminist voice against violence and oppression, Battered Women's Support Services is a strong, dynamic organization that provides support and advocacy for women who have experienced abuse, as well as community education and training about violence against women. Part of a global feminist anti-violence movement, their long-term goal is the elimination of all violence against women and girls. For more information on BWSS and the support services available, visit www.bwss.org.

Why it’s so hard for women to legally defend themselves against their attackers
Mar 24, 2021 9:06 PM