TORONTO — Five things to watch for in the Canadian business world in the coming week: Federal budget Finance Minister Chrystia Freeland will release her first budget on Monday.
Apr 18, 2021 7:00 AM By: The Canadian Press 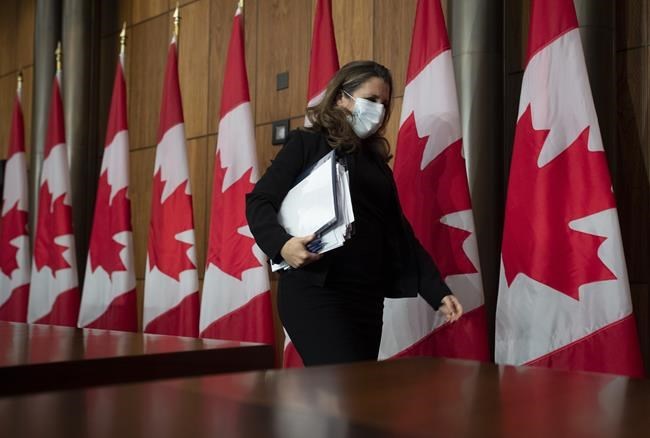 TORONTO — Five things to watch for in the Canadian business world in the coming week:

Finance Minister Chrystia Freeland will release her first budget on Monday. It has been more than two years since the federal Liberals have delivered a budget. They skipped last year due to what the government said was the uncertainty caused by the pandemic.

Canada Mortgage and Housing Corp. will release housing starts for March on Monday. The annual pace of housing starts slowed in February even as the housing market in Canada remained red hot.

Statistics Canada will release its reading on inflation for March on Wednesday. The consumer price index in February was up 1.1 per cent compared with a year earlier as higher gasoline prices helped push the annual rate up from a 1.0 per cent year-over-year increase in January

Rogers Communications will release its first-quarter results and hold a conference call with financial analysts on Wednesday. The company recently announced a plan to buy Shaw Communciations Inc. and its Freedom Mobile for $26-billion. But the friendly deal requires federal approvals.

This report by The Canadian Press was first published April 18, 2021.

Queen's cousin accused of willingness to sell Kremlin access
May 9, 2021 8:55 AM