A BCCDC report suggests nearly every new COVID-19 case is of the highly transmissible strain.

The latest report from the BC Centre for Disease Control (BCCDC) finds that nearly all new coronavirus cases in the province are the highly transmissible Delta variant strain.

Of all the positive samples sequenced from July 25 to July 31 in B.C., 100 per cent of the cases were confirmed variants of concern, according to the BCCDC Weekly Update on Variants of Concern (VOC).

The report states that the main circulating variant is Delta (B.1.617.2), accounting for about 95 per cent of positive specimens sequenced.

The Gamma variant accounted for approximately three per cent of positive specimens sequenced while the Alpha made up about two per cent.

The BCCDC notes that the prevalence of VOCs was similar across health authorities. However, this week's report reflects partial data due to a delay in receipt of positive samples from front-line laboratories; changes are expected as additional specimens are received and sequenced. 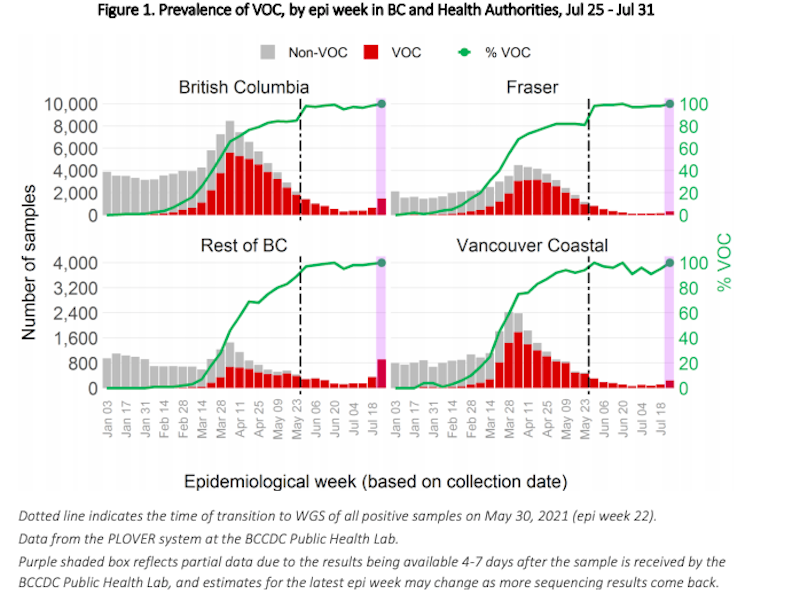 Earlier this month, Prof. Sarah Otto of the University of British Columbia told the Canadian Press that the Delta variant, which first became prominent in India, is displacing the one that originated in the United Kingdom.

"Delta is now the most common variant in the province, with its frequency doubling every week relative to Alpha," said Otto, who is an expert in the university's zoology department on the mathematical models of pandemic growth and evolution.

Originally a variant of interest, B.1.617.2, now known as the Delta variant of concern under the World Health Organization's new naming system, surfaced in Canada earlier this year. In April, incoming passenger flights from India and Pakistan were banned in an effort to curb the spread of the highly transmissible strain.

Back in June, health officials from across the globe warned that the strain posed a dire threat to eliminating COVID-19.

Dr. Jeffrey Joy, Assistant Professor at UBC's Department of Medicine, told Vancouver Is Awesome in a previous interview that he wholeheartedly agreed with Fauci's sentiment.

The Delta variant has 10 different mutations in the spike protein, relative to the original coronavirus (COVID-19) strain, explained Joy. "And in particular, it has three that make it easier for the virus to attach to the ACE2 receptor which is a receptor on our human cells that allows it to infect ours cells more easily, particularly for mutations."

The BCCDC's latest report notes, however, that 78 per cent of new hospitalizations were in unvaccinated people.

Otto said B.C. is beginning a fourth wave of COVID-19 infections, but how high it will get and how fast it will rise depends on everybody's behaviour.

The two things people can do to prevent the wave from getting "very high" is get vaccinated and avoid indoor crowded spaces without a mask, she said.

The province and the country will continue seeing such waves as new, more transmissible variants arise, but Otto noted that "vaccinations are really protecting people from the worst ravages of this disease."

With files from the Canadian Press.