Community invited to participate in reconciliation event
Aug 30, 2018 11:12 AM By: Sara Donnelly 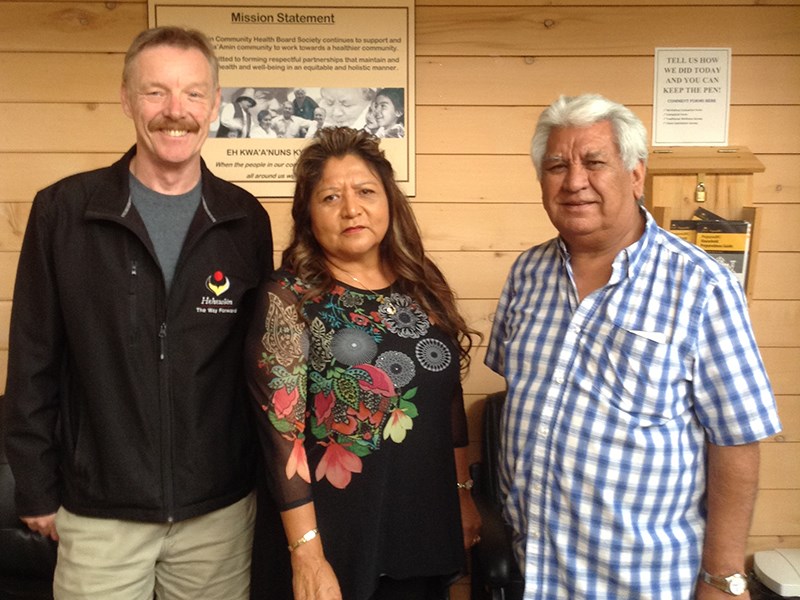 HEALING JOURNEY: [From left] Phil Russell, Cyndi Pallen and John Louie are organizing ceremonies to honour the survivors of residential schools on Sunday, September 2, in Sechelt and Monday, September 3, at the Tla’amin Salish Centre starting at 10 am. Everyone is welcome. Contributed photo

On Monday, September 3, a ceremony honouring those who attended residential schools will take place starting at 10 am at the  Tla’amin Salish Centre.

The event, organized by Cyndi Pallen, John Louie and Phil Russell, is open to the greater community and is a continuation of the Hehewsin Reconciliation Project. “We’ve been working to bring awareness of Reconciliation,” said Pallen. “It’s not only educating our community of Tla’amin, it’s the broader community of Powell River.”

The ceremony in Tla’ amin will include a cedar bough brushing, prayers, songs and a luncheon.

It follows a gathering on Sunday, September 2, at Sechelt Nation. Members of Tla’amin, Homalco and Klahoose First Nations will travel to Sechelt, the site of the former residential school and participate in a traditional burning ceremony and reconciliation walk.

The Calling The Spirit Home Ceremony is a sacred and significant event for survivors and their families, added Pallen. “The significance of the work that we’re doing is physical, it’s visual,” she said. “When you are a child and you’ve been taken away from your community your sense of belonging is fragmented. It’s a sadness and you carry that sadness throughout your life. Bringing people together is a connection and it’s a healing.”

There are thought to be more than 100 residential school survivors from Tla’amin, added Pallen. “We’re thinking that this will be an annual way of bringing people together.”

On Monday, people from Powell River are encouraged to come to the ceremony at Tla’amin to participate and to learn. “It’s a continuation of engaging the non-indigenous community,” said Russell, who notes that in contrast to many places in Canada, progress is being made between the two communities. “We’re a unique place here. We are actually moving forward, and it isn’t happening in a lot of other places in this country at this time. This is an example for the rest of the country that it can be done.”