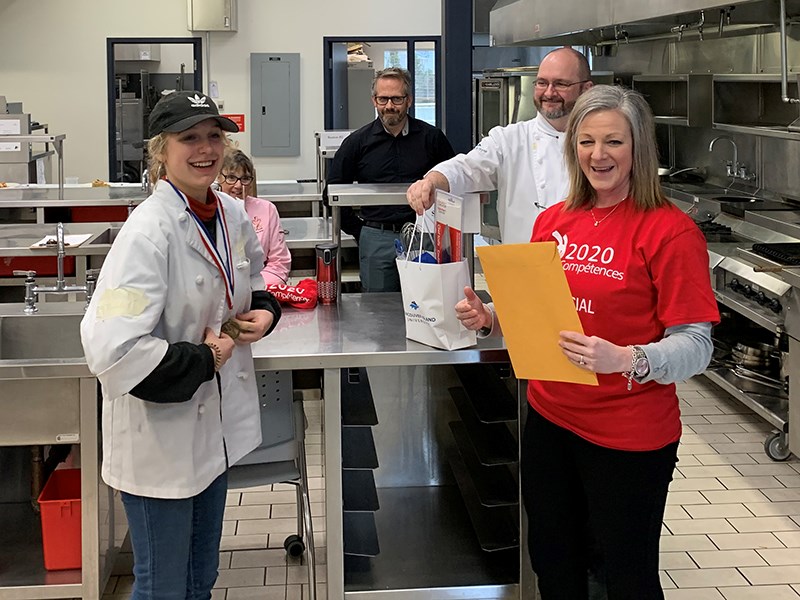 COURSE CORRECTION: Esmé Long [left] won a gold medal in culinary arts at the Skills Canada regional competition in February while taking part in the dual credit culinary arts program with Vancouver Island University and Brooks Secondary School. School District 47 is adapting to changes made to that program by the provincial government. Contributed photo

Graduated students taking dual credit courses associated with Vancouver Island University (VIU) will have a reprieve with their funding in the coming school year.

At the School District 47 board of education meeting on September 9, superintendent of schools Dr. Jay Yule said there have been some changes to that program from the provincial government this year. He said there is a difference in interpretation of the funding.

“Government has interpreted that differently now and so students are only eligible for dual credit programs while they are in grade 12. They are not eligible after their grade 12 year.”

Up until this year, graduated students in School District 47 were receiving funding for dual credit programs at VIU.

Yule said there are a few pieces in place where students can still get dual credit courses if it’s leading to a specific profession or professional designation. He said an example would be where a student graduates and realizes they want to go into nursing and they didn’t get the sciences.

“They are eligible for funding for those courses,” said Yule.

He said the government was never intending to fund students who are a year out of school but the school district took advantage of the interpretation and it worked well in the past.

“As you can see, we are one of the leaders in the province of students going into the Industrial Training Authority (ITA) trades programs,” said Yule. “We are happy to say the ITA has stepped up and helped out because we had said even though we may not be funded for those students this year, we would fund them on our own.

“The commitment to those students in March and April was that they would be in a program and that’s why there has been some lobbying to government to continue it. It has been good for Powell River. However, the ITA has now provided some funding for these students who are in trades programs this year. It is a bridging gesture, which I think is wonderful for us.”

Yule said it is a little bit more difficult this year. He said protocols going into universities and schools are very different. He said VIU has decided to run the culinary program out of Ecossentials this year rather than Brooks Secondary School because protocols they would need to put in place are different from the school district’s.

“It didn’t make sense this year to be at Brooks,” said Yule. “All of our other programs are going ahead as scheduled, but we’ll follow the VIU protocol, which is more of that model we had in June with students being in half time.”

Yule said he’s happy to say the program will continue to move forward. He said he wanted to bring the matter up because there has been lobbying by different school districts wanting to push back to the government and leave the interpretation as it was in the past, and fund those programs, especially in rural areas.

According to secretary-treasurer Steve Hopkins, School District 47 has 22 students in trades programs with VIU and another 17 in a variety of academic streams at the university who essentially all graduated last year.

“We had committed to them last spring we will honour those registrations for this school year,” said Hopkins, “but moving forward we won’t be enrolling graduates.”