Flashback: 50 years ago in Powell River 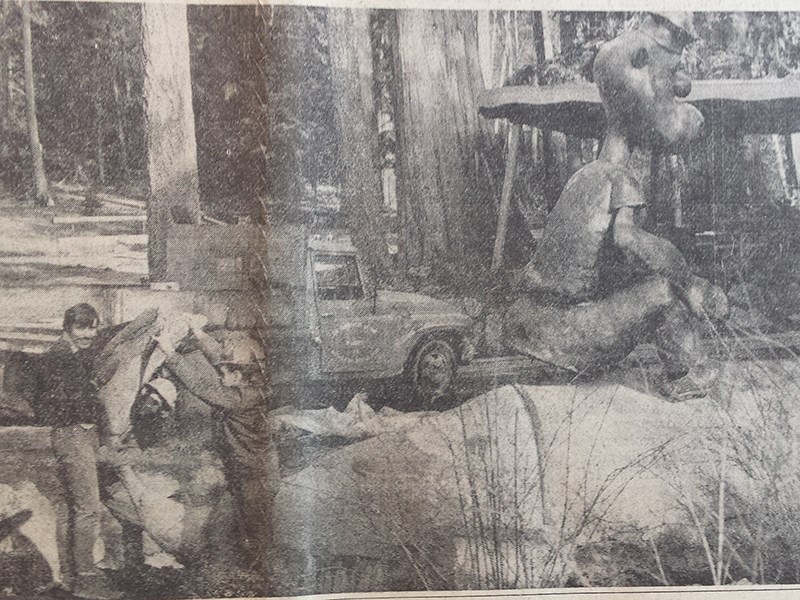 RIDE ‘EM POPEYE!: Where Captain Ahab failed, Popeye succeeds. At least that’s the way it will appear in Willingdon CampSite. Municipal parks crew Don Bowes, Fred Agius and Fred Moss try the concrete tail for size after seating the “whale bustin’” Popeye aboard. Figures are part of Westview Rotary’s 1969 prize winning float which the club donated to the municipality. Works department fiberglassed Popeye and covered Moby Dick with concrete to ensure many years of pleasure for local youngsters. Olive Oil and Wimpy will soon join Popeye, but Brutus is another problem, said Fred Moss. “Brutus is over eight feet tall and his arms are four feet in circumference. We are having a job getting him into the shop for treatment.” To work on Popeye the model, it was decapitated, then stuck together outside. “We might have to fiberglass Brutus outside,” said Moss. Powell River News photo, February 1970

The photo above and article below were published in the Powell River News on February 26, 1970.

Pistons left the floor at halftime with a narrow 33-28 margin. It was a close and rough game all the way as both clubs could not find the scoring range. Warriors zone defence worked quite well, but Pistons seemed to come through with the clutch shot whenever the Warriors got too close.

Piston guard Don Smith did a good job in keeping Warriors high-scoring Don Schmunk in check as Schmuck was held to 10 points. Warriors big men Rod Nissen and Don Douglas both tied for top scorer on their club with 11 points each, mostly on the boards.

Pistons moved the ball as it should be done against a zone defence and fed their pivot man Bob “The Hawk” Simmons for his 18 points, tops for the night.

Fast-moving Don Smith was next with 16 points. It was a team effort for the Pistons, who finished second in league play behind the Warriors and finally jelled in the last half dozen games to nail down the playoff championship.