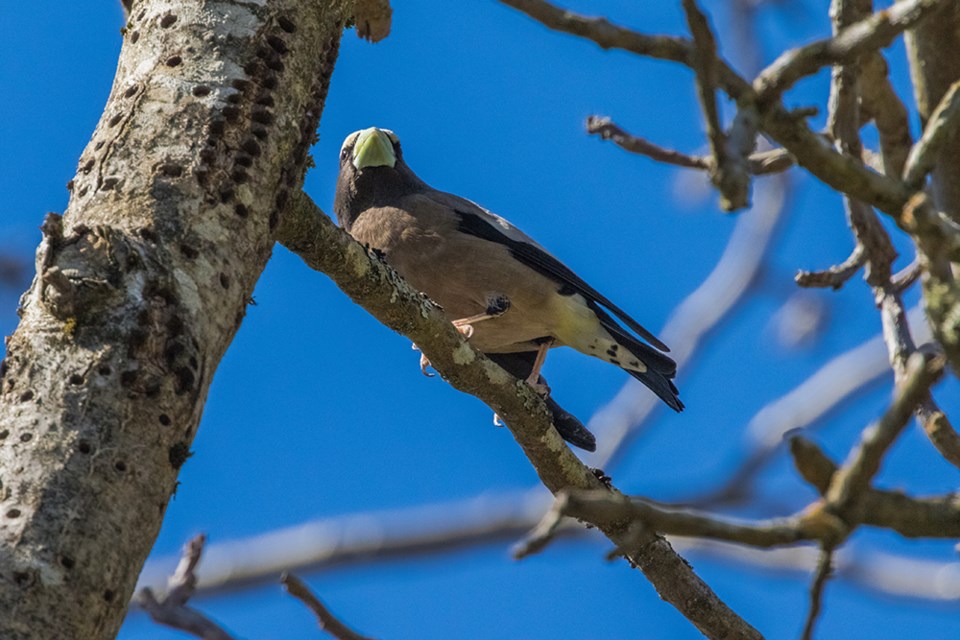 An evening grosbeak perched in a tree.Contributed photo

The flycatcher made its way up from the Lower Sunshine Coast via vehicle and ferry. Hit by a car, its wing was broken near the wrist, an injury difficult to heal but essential to flight.

It had already begun its fall migration to Bolivia and had now lost its chance. Spring arrived and it was still not flying. There was great concern at PROWLS.

The ultimate decision kept being put off: euthanasia is the last choice. And then, suddenly, Olive was flying! The bird flew up from the floor, hit the wall at the end of the porch, turned and flew past PROWLS president Merrilee Prior, across the living room and hit the small piano window before turning again and landing on the floor. It was ecstasy all around!

The flycatcher was a very good patient, hanging in there, continuing its exercise, with grand results in the end.

On the other hand, the male grosbeak was not a good patient. He was spotted lying on Covey Road last December (probably hit by a car) and suffering from serious head trauma and a damaged wing.

He recovered from the head trauma, consuming mountains of mealworms and fruit and sunflower seeds, but even a few months later his wing drooped and he was a perch-potato.

During his long stay, he lost the male’s bright yellow monobrow and his yellow chest became markedly toned down; he looked like a female.

When spring came, migrating evening grosbeaks returned and he worked hard on his flying. He was released among them.

Within seconds of landing in the tree and calling, he was joined by other grosbeaks. Nature is amazing.