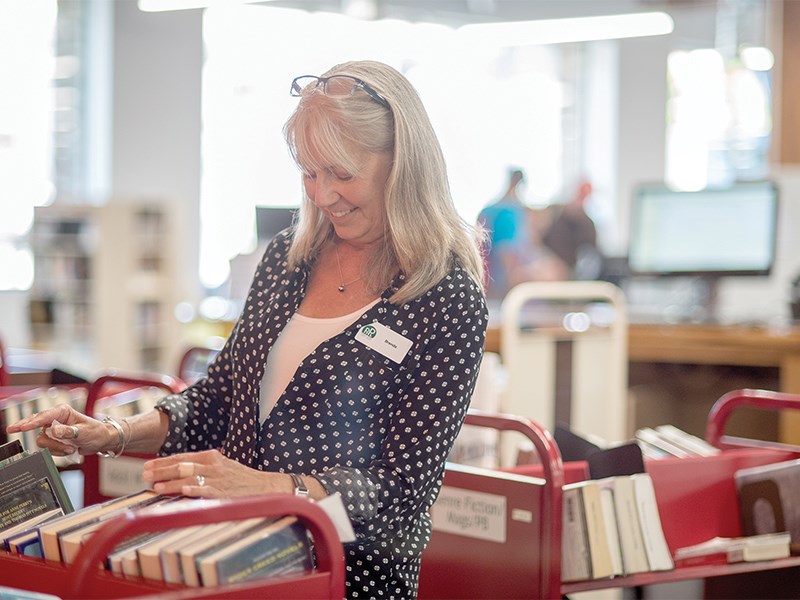 MULTIPLE RESOURCES: Library assistant Brenda Allan organizes some of the many books available to visitors at Powell River Public Library. In addition to reading material, the new library boasts a diversity of areas for sitting, working and tutoring. Jennifer Dodd photo

Almost three years after going to referendum on the construction of a new library at Crossroads Village Shopping Centre, Powell River Public Library is finally open to the public.

Assistant chief librarian Rebecca Burbank moved to town shortly after the referendum and started working at the old library location.

"They told me the new one would be built in the summer," said Burbank. "I always joke they didn't tell me which summer."

For many, such as retired resident William Langlands who moved to town in 1979, the wait has been much longer than three years.

"There was a lot of pressure on the library then; it was overused and small," said Langlands. "People were writing letters to the editor and taking action for a new library 38 years ago."

According to Burbank, the transition to the new library was strongly supported by the community and brought together a diverse group of staff members.

"None of us had ever done anything like this," she said. "All of our contracts say 'other duties as assigned.' There was a lot of that in opening the new library."

Burbank said the library has always been a well-utilized public resource.

"Many patrons used the old library," she said. "They understood there was a lot that could be improved. We're creating something the community can be proud of with this new library."

According to Burbank, the new space reflects the staff, volunteers and other groups and individuals who helped make it a reality.

"The amount of work put in by so many people really makes this Powell River's library," she said.

Not-for-profit organization Friends of the Library has also supported the library in its move to a new location, said Burbank.

For more than 20 years, the organization has been advocating and raising funds for the library, said treasurer Ann Trousdell. The group has raised $70,000 so far for the new space, holding book sales and other events to support the purchase of new materials, including books and computers.

"We've also had a lot of support from organizations and families who have helped us fund rooms like the Rotary Makerspace," said Burbank.

According to Burbank, the new location is much larger and more inviting than Powell River's previous library. She said library staff design styles are reflected in the library's comfortable furniture.

"We've had a lot of control over the inside, like the carts, seats, tables and even the service desk," said Burbank. "The old library was more like a warehouse for books. This library has diverse places for people to sit, read and meet."

Library staff and board host a grand opening celebration from 12-3 pm on Saturday, July 22, at the library, 100-6975 Alberni Street.