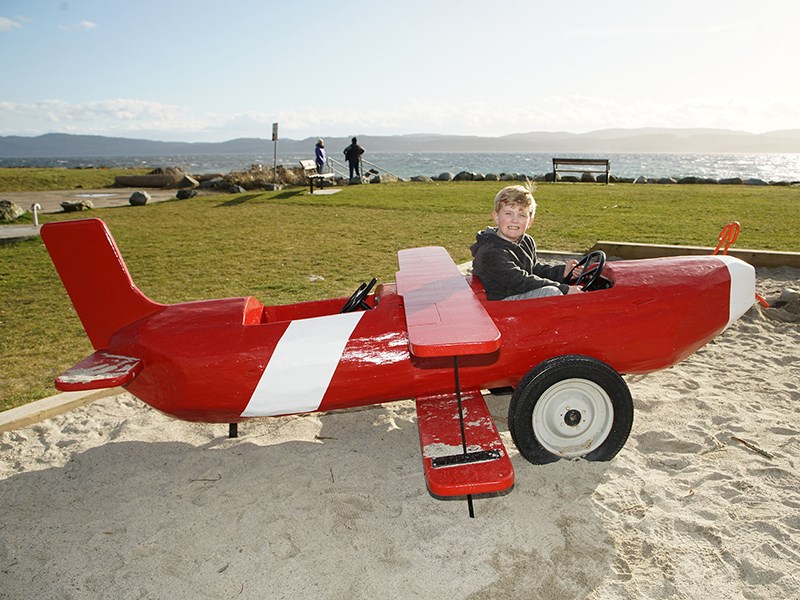 PLAYGROUND PLANE: Seven-year-old Henry Newman plays on the new airplane at Grief Point Park, which was structured out of an old log pulled from Larry Gouthro Park. This airplane replaces the popular old structure that was removed from the park because it was at the end of its service life. Paul Galinski photo

City of Powell River crews have replaced the airplane that had been a fixture for years in Grief Point Park.

Parks supervisor Mike Kaban said the airplane in place at the park previously had been patched up a number of times and was at the end of its service life.

“It was just too rotten and kids were sitting in a puddle, so it had to go,” said Kaban. “There was no more bondo or lipstick or whatever else you could put on it. It was time to make it not be there anymore.”

Kaban had a fir snag from Larry Gouthro Park on Manson Avenue which formed the basis of the new airplane. He said he kept the wood to see if it could be formed into something and it became apparent it would serve as the structure for redoing the airplane. It has been turned into the fuselage that two children can sit in.

“We used a piece of the snag that came out of Gouthro park to newly build another piece of play equipment at Grief Point,” said Kaban.

The project started around the time COVID-19 began. City crews did the rough carving with a power saw after the wood dried out. Civic properties did some finishing, stuck the wings on and painted it. The airplane is red in colour, which is the same as the old plane was. It’s as close as the crews could get to the new airplane being the same shape as the old one.

Kaban said the airplane was a cherished feature of Grief Point Park, which has often been referred to as Airplane Park.

The new plane has some refinements, so there is drainage, resulting in less rot potential.

It appears the installation of the new airplane is a popular feature.

“I think children were on it before the concrete was completely dry,” said Kaban. “We used some fast-set concrete because I knew the airplane would be getting used immediately.”

Kaban said he is pleased the new design will ensure children will not be sitting in puddles. With the new design, when seats were built, they were equipped with holes so the seats would drain.

“We designed this one so it will drain better, so hopefully, it will stay rot-free for longer,” said Kaban.

The airplane complements the play equipment already in the park. Kaban said the city received a grant for a new play structure a couple of years ago. He said the addition of the airplane is part of the continual upkeep of the park, which also has a set of swings that are not new but are fully serviceable.

In the future, Kaban said he would like to see free play for kids in the park, not necessarily with play structures.

“Rocks, sticks and sandpiles, and whatever, is a good thing we need to foster,” he added.