PROWLS: Rescue of the week 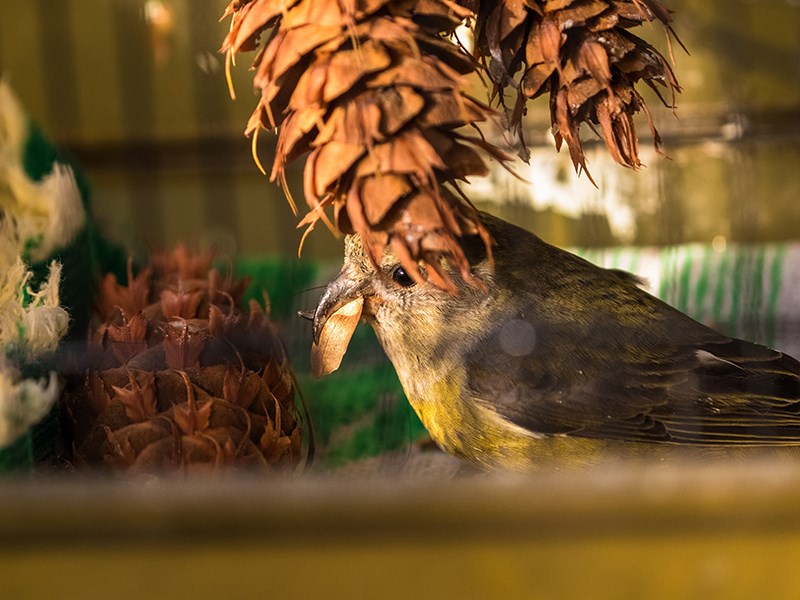 This lovely red crossbill hit a window in Stillwater, was knocked out and put in a covered box. Upon pickup, Powell River Orphaned Wildlife Society president Merrilee Prior found it still stunned. With an injured wing as well, a visit to Dr. Barnes at Westview Veterinary Hospital was booked.

Meanwhile, the bird ate with enthusiasm, loving the abundance of fir cones at PROWLS. First it grasped the cone with one foot, then, placing the tips of its specialized crossed bill shape under each cone scale, pushing the scale up and exposing the seed, its tongue quickly slips in and claims every single seed while also removing the seed cover. This takes longer to describe than to perform and every cone was quickly emptied.

After nine days of healing, it was moved to the large flight cage to practice flying. When released back at Stillwater, it looked around, flew up into a fir tree and began eating.

Opportunistic finches, they actually eat all types of cones: pine, spruce, spruce, Douglas fir, hemlock, or larch. The red crossbill is so dependent upon conifer seeds it even feeds them to its young. Consequently, it can breed later in the year when it can find a sufficiently large cone crop.

Not a true migrant, it follows the cones. In early summer, they do eat seeds of birch and alder species, as well as box elder, along with many kinds of insects. Red crossbills are nomadic, especially in winter, and in some years irrupt far south of their normal range.