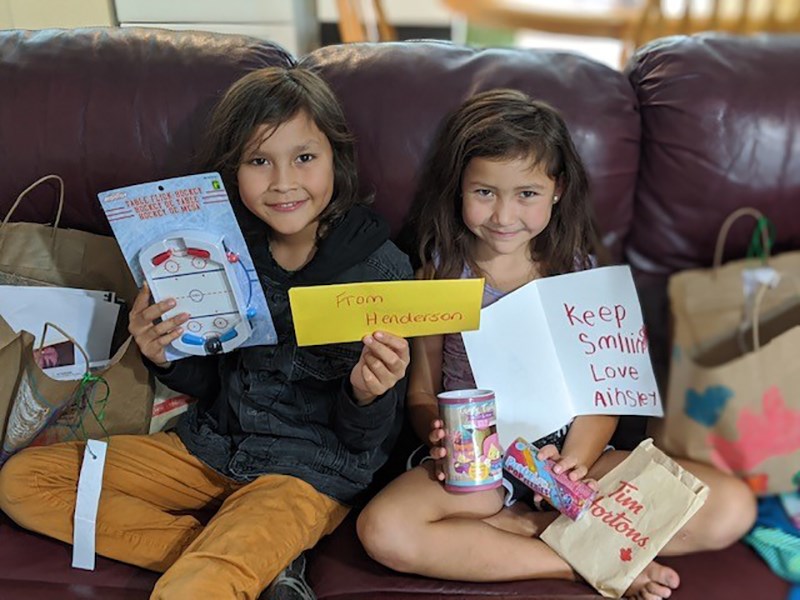 Returning to school in September can be a stressful time for many students under normal circumstances.

With all the changes and uncertainties facing teachers and students trying to begin a new school year, Henderson Elementary School principal Jasmin Marshman wanted to show support for the children of Tla’amin Nation. The idea came about while Marshman was checking in on a friend to see how she was doing under recent shelter-in-place orders in Tla’amin, which affected all residents due to cases of COVID-19 in the area.

Marshman had been the principal at James Thomson Elementary for eight years before moving schools just last year.

“I had told her I was trying to think of something to do to let the kids in the nation know that we are all thinking about them and missing them,” said Marshman.

She initially planned on doing some Facebook storytimes to reach out, but remembered the children had made EDAS (Everybody Deserves A Smile) bags for Powell River’s vulnerable and homeless population last winter. This set the wheels in motion to contact Kate Boyd, their StrongStart facilitator and EDAS sponsor, who was excited and on board right away.

“All the kids and staff at Henderson decorated at least one bag, some did multiple bags,” said Marshman. “They also made cards to go in each bag. We are a very small school, just under 90 kids right now, so it was a big undertaking.”

About 25 per cent of students are still at home, postponing their return to class for later this month, according to Marshman.

“This was a great distraction for students and staff here for our first week back,” she added. “We were all feeling some apprehension, hopeful but nervous about being back and doing it all right. Giving some time to make another child feel better was a wonderful way to start the week off for the students here.”

To ensure there was as little contact with the bags as possible, Marshman did all the shopping and stuffed all the bags herself. She said it took three trips with multiple carts to purchase all the crafts, activities and surprises for the children.

On the morning of September 16, Marshman, Boyd and her daughter Ally handed the bags over at the checkpoint in Tla’amin to Gail Blaney, Jessica Johnson and Leslie-Ann Louie. That afternoon and into the early evening, a total of 104 bags were delivered throughout the community to children from preschool all the way up to grade 12.

“I am so proud that the students and staff who are here got the bags and cards done,” said Marshman, “and grateful to all the organizations that stepped up right away to assist us in pulling this off so quickly.”