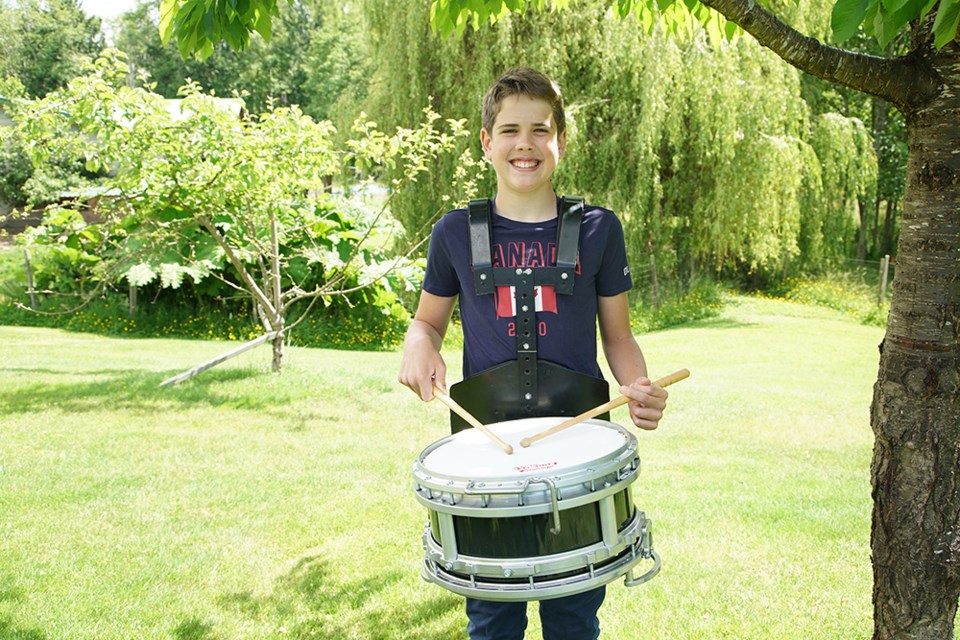 In just his first year of drumming, 13-year-old Francois de Villiers came in fourth in the spring 2021 World Online Piping and Drumming Championship.

The Clansman Pipe Band member said he entered the competition because his brothers, who are pipers, have entered competitions, so he thought he could perform for one.

Francois actually started as a bagpiper but he didn’t really enjoy it so he thought he’d give drumming a try.

“That’s how it all started,” he added.

Francois heard about the world online competition through the bagpipe instructor, who usually tells the de Villiers family about competitions.

“He said: ‘there’s a competition coming up, do you want to join?’ I asked if I could sign in,” said Francois.

He said the competition was divided up into drumming levels. He had never been in a competition, so he signed up for the beginner’s classification, which is grade five, with grade one being the highest class. When Francois decided to compete, he steadily practiced the 6/8 march he was planning to enter.

Once Francois was ready to perform, his mother Ingrid made a video for uploading to the competition. Francois performed upstairs in his room for the video and submitted the first take that was recorded.

The drumming selection for the competition was about two minutes in duration. Ingrid submitted the performance to the competition a couple of months ago and the evaluation took a couple of weeks. Francois received an email indicating he had placed fourth.

“I was happy about that,” he said. “It was my first competition so I thought maybe I could just do it and see how good I am.”

“It’s a big motivator for me to carry on and I can do more competitions,” said Francois. “I’m trying to get better.”

He plans to carry on with the pipe band and that will help him keep well practiced.

In addition to drumming for the pipe band, Francois has taken up drumming with a drum kit.

He is trying to develop rhythm and believes he has natural ability. He has studied drumming with Jack Russell, who has been a good instructor, said Francois. In all, Francois has about a half of a year of instruction.

He’s now looking forward to getting back together with the pipe band, saying it will be fun.

The following are judge Duncan Millar’s comments to Francois, as posted on the competition website:

“Thanks so much for competing, Francois. You have good natural timing and feel for the melody. Work on developing good, even buzzes on each hand that sound exactly the same. You already articulate the triplet feel under the rolls well, just get the buzzes even to fill out the time evenly.

“Tempo is a little fast. I would like to hear you play with a piper or backing-track (preferably a piper) to hear some duel feel. This tempo is a bit quick for a 6/8 march.

“Good feel for the phrases, and although we don’t have the melody to hear from a piper, you are presenting the pattern well. Stay in the centre for the best tone, don’t wander. Flams are always two sounds and you must play so you can hear the grace note. Keep them open and use symmetry to flow back and forth hand-to-hand.

“All rolls need more buzz to fill the time and give the illusion of sustain, like the sound of paper tearing from one end to the other, smooth and constant until it stops abruptly. Well done.”