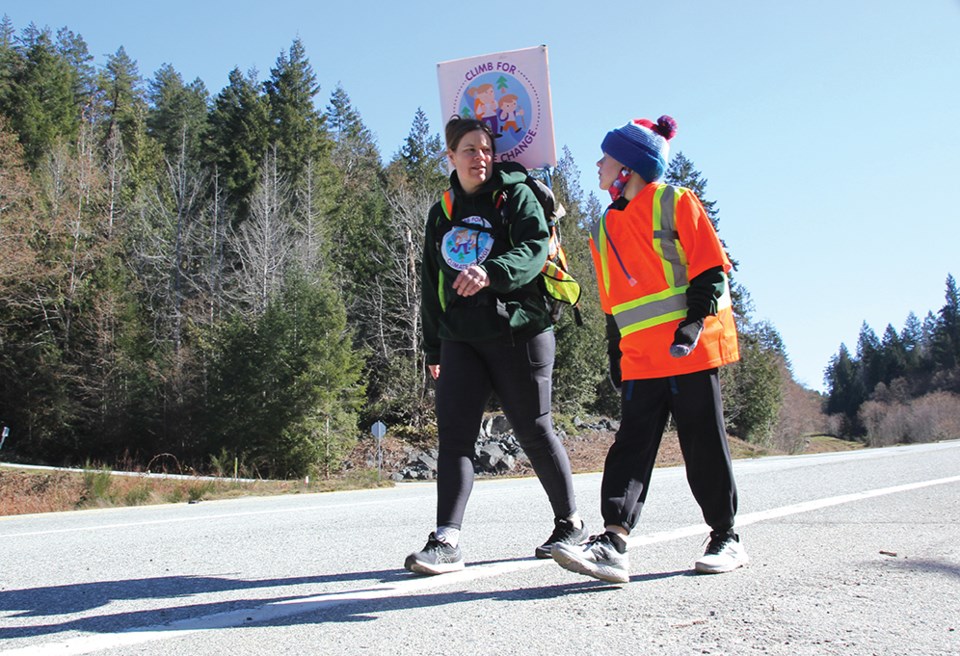 Ten-year-old Cody Kelso and mom Megan during their 115-kilometre walk of the Sunshine Coast. The pair hope to raise $30,000 for climate action.Keili Bartlett photo

Spring Break for Davis Bay’s Cody Kelso won’t include much of a break this year. The 10-year-old is on a mission to cover the length of the Sunshine Coast by foot.

With his mom Megan by his side, the duo set out in Gibsons on March 14. By the afternoon of March 16, they reached Saltery Bay. Now on the Upper Sunshine Coast, they were 30 kilometres from their destination. They would rest a day, and then make their final push – the longest distance they would complete in their 115-kilometre journey.

The Kelsos hope to raise $30,000 in total, with $20,000 for solar panels at the Sunshine Coast SPCA and $10,000 toward the B.C. Sustainable Energy Association’s Cool It program for children.

After their third day on the road, the Kelsos raised nearly two-thirds of their goal via their website, climbforcc.org, and more than $300 in donations from people they passed by during their trek.

“It’s been pretty good,” Cody said after 85 kilometres of walking. “There’s always that one part of your body that just hurts all the time. For me, that’s my ankle. For my mom, she’s been getting a whole bunch of blisters.”

As for Megan, she said, "I am hobbling along, but getting there."

On the third day of their walk, they started off slower than their usual pace. When one of their support drivers told Megan they were about halfway to their day’s stopping point, she realized they needed to pick up the pace if they wanted to make the 12:25 p.m. ferry. Otherwise, they’d have to wait several hours for the next one.

“It was the push we needed to get back to our normal pace, which then got us to the ferry,” Megan said.

The pair also have a new motto from their many hours of walking: “Believe. Do. Achieve.”

Megan and Cody said the positive responses they’ve heard along the way helped them keep going.

“Thank you to everybody,” Megan said. “[We] really appreciate all the encouragement, hearing the horns honking and the waves we get and the kind words that are being shared on Facebook. It really does mean the world to both Cody and I.”

To celebrate reaching their destination, the Kelsos will enjoy some time at a spa, then fly home. They’re also looking forward to a big breakfast at Magpie’s Diner in Powell River, but they don’t have a plan as to how to get to the restaurant. If they're feeling up to it, Megan said they may walk. After all, what’s a few more kilometres?

Animal sanctuary struggles with expansion amidst pandemic
Aug 30, 2020 6:02 AM
Comments