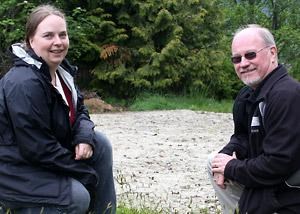 It’s that time of year when turtles will soon be leaving the safety of water and crawling to dry land to lay eggs, a process the community is being asked to help monitor at the nesting area on Cranberry Lake.

The City of Powell River’s parks, recreation and culture department, in conjunction with biologists from the South Coast Western Painted Turtle Recovery Project, installed a nesting ground for turtles at the former bird sanctuary. They covered an area with a sand mixture as a place for the turtles to lay eggs. They also installed basking logs in the lake near the area to attract the turtles and give them a place to soak up sun, an essential part of the egg-laying process.

Since then the area has remained dormant, but nesting season is fast approaching and the biologists returned on Wednesday, May 25. It is now the time to prepare for the turtles and make the nesting area as ideal as possible for the first possible season of use.

Meeting with city parks representatives, biologist Aimee Mitchell went over the protocol for monitoring the area and gave a crash course on how the breeding will play out. Mitchell discussed with the parks workers when the best time to mow grass around the area would be and what sort of rules would need to be enforced in the sanctuary. A sign will be put up advising people to stay clear of the area, as turtles are scared off easily, and asking people not to bring dogs into the area.

Mitchell said that it is hard to know what to expect this year as it is the first time the site has been available to the turtles. She hopes it will be well used, but it is believed that turtles do have a tendency to stick with the nesting areas they know, so it may take some time before they take to the new spot. Also, it’s still unknown how many female western painted turtles live in the lake, so the level of breeding that will occur is also a variable.

“There could only be two or three females that are here and maybe they won’t even come exactly here,” said Mitchell. “We’re hoping that at least a couple will come. But any information is good information.”

The turtles lay an average of 14 eggs in a nesting spot, each about the size of a ping-pong ball. These eggs are buried below the surface of the sand. The sex of the baby turtles is determined by the temperature of the place where the eggs incubate and hatch. A warmer location will result in female babies and some research shows that females, when choosing a place to nest, will sometimes pick a location based upon what gender of turtles are most needed in the general population.

Local nature videographer Terry Brown is working with the parties involved to hopefully gain video footage of one of the turtles laying its eggs. The footage will be used in an educational video that Brown and partner Jude Abrams are developing on the turtle and the conservation efforts taking place along the Sunshine Coast. Volunteer watchers are being asked to call Brown if any turtles are seen approaching the nesting area so he can come and document the process.

More turtle watching volunteers are needed and anyone interested in helping out can contact Bill Reid, director of parks, recreation and culture, at 604.485.8907. Shifts are two hours long and are in the evenings until sundown. The work consists of staying put in the observing area, keeping quiet with a book or craft and keeping an eye out for turtles. If a nesting is observed volunteers are asked to make a note or mark the spot. All details will be explained to volunteers.