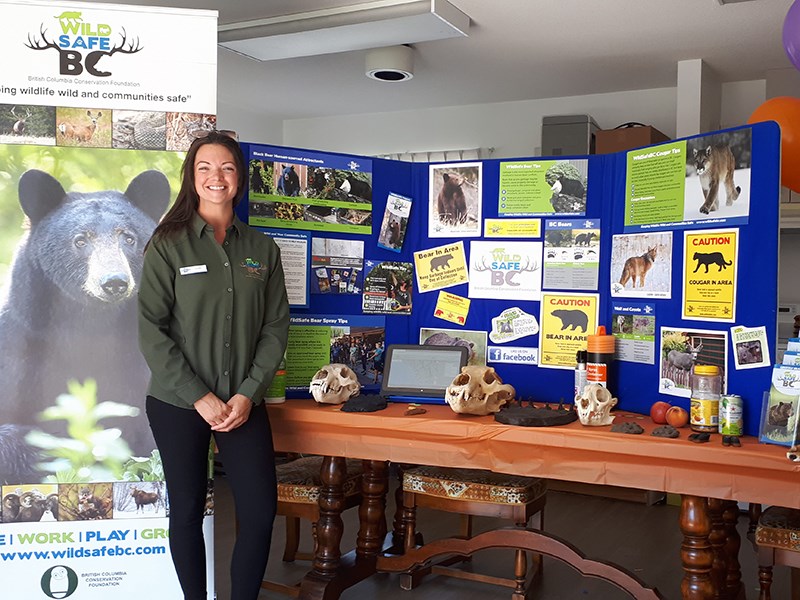 PROVIDING EDUCATION: WildSafeBC qathet Regional District coordinator Krystle Mitchelitis gave a presentation to school-aged children this past year, which was made more difficult because of COVID-19 restrictions. WildSafeBC provides people throughout the qathet region with information on wildlife, and how to avoid providing attractants for animals. Contributed photo

While COVID-19 has drastically affected interpersonal interaction, the pandemic has not affected incursions of wildlife into inhabited regions.

Krystle Mitchelitis, WildSafeBC qathet Regional District coordinator, said the year for WildSafeBC started slowly, partially due to the pandemic, which created challenges in terms of public information interface. However, as the year wore on, she was able to move beyond videoconferencing and spread the message about actions required to minimize wildlife encounters in the urban setting.

In reviewing 2020, Mitchelitis described the wildlife landing page as a success, which was a document sent to a number of different organizations in the community. She said the organizations could host it on their own websites or distribute to people interested in WildSafeBC information. She said the landing page was given to Tourism Powell River, the Sunshine Coast Trail, Lift Community Services and two real estate agencies.

“It’s helping get the message out about our local wildlife and bylaws and people are now able to access that information in more places,” said Mitchelitis. “Community members may not be familiar with WildSafeBC specifically but they would still be able to find that information through other organizations. That was probably my favourite win for the season.”

She said she thought it was great for the real estate companies to take it on because there are people moving to Powell River from other places, such as from bigger cities, who may not be familiar with wildlife passing through their yards.

Mitchelitis said another part of the WildSafeBC program was the business pledge, established in July, which involved going to local businesses to see what they are doing to reduce wildlife attractants, such as garbage and compost. By the end of the season, 10 businesses had joined.

Presentation-wise, among other things, Mitchelitis has spoken to a number of students. She conducted sessions on wildlife safety. Those started off, mainly through Zoom at the beginning of the season, but she was later able to go to schools and do presentations in person, observing safety and physical distancing rules.

Mitchelitis said during September, WildSafeBC held events in Powell River. She conducted a bear spray workshop, where she did a presentation and then the group went for a walk through the Millennium Park trails.

She said in terms of issues in the community during this past year, they were mostly things such as garbage, or dog food being left out while a resident was away. There were also two dogs killed by black bears in their own yard this past year.

“Fruit and nut trees are planted by humans and should be managed by humans,” said Mitchelitis. “Improper management is bringing wildlife into our neighbourhoods. A bear might be coming for an apple tree but if it becomes habituated to that community, the neighbourhood is going to be more at risk.”

Mitchelitis said 2020 was an abundant year for fruit and she said calls to the local conservation officer were down compared to last year. In 2020, there were about 150 calls made. Perhaps with the abundance of berries in the wild, bears were going for natural food sources this year, she said.

In terms of bears destroyed in the region, the last report Mitchelitis had was six. She said that is reduced from 2019. She said there is a perception that if people call the conservation officer, the bear will be destroyed, so a lot of people don’t make that call.

“However, the earlier the calls, the more that the conservation officer and I can identify the attractants and reduce them before the bear becomes habituated, and therefore would not have to be destroyed,” said Mitchelitis. “If we can identify the attractants, the bears are just going to keep passing on. They are not hanging out in the neighbourhood because there are cool people there. They want the food.”

Mitchelitis said the WildSafeBC program, like the bears, goes into hibernation over the winter. She anticipates a start-up in mid-April 2021.

This was her first year as coordinator, having a background in outdoor tourism. She said WildSafeBC in this region is sponsored by qathet Regional District, with partial funding from City of Powell River waste management and Powell River Community Forest.