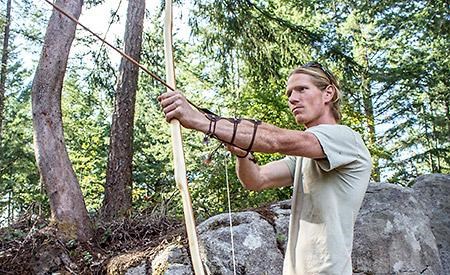 Although the skill to make a medieval English longbow is a lost art, one such craftsperson remains, and he lives in Powell River.

Jaime MacDonald began making longbows about nine years ago and is heading to England on his first visit, where he hopes to re-teach the English a thing or two about the craft.

“To many, the longbow is an almost mythical implement,” said MacDonald. “But, really, it’s mostly a functional stick.”

It’s a quaint way to describe what was, in medieval times, a very efficient killing weapon. At two meters long and weighing about half a kilogram, longbows were capable of launching armour-penetrating missiles to a range of about 250 metres. It was an effective weapon against the French, who were fielding heavily armed mounted knights at the time.

MacDonald was invited to England to lead a bow-making workshop ahead of the 600th anniversary of the Battle of Agincourt next month. The battle, which featured one of the first large-scale deployments of English longbows, is also well known for being featured in William Shakespeare’s play, Henry V.

Unlike many modern longbow makers, many of whom cobble together bows of composite materials, MacDonald still makes his the authentic English way using wood from the yew tree.

“The yew wood is really what makes these bows,” said MacDonald. “Most of this wood comes from the north part of [Vancouver Island] and we are really lucky to have this resource so close.”

Known to grow in shaded, old-growth areas, the Pacific yew is a long-lived tree known for medicinal uses in first nations cultures. While it is a slightly different from the European variety, it has the benefit of being more plentiful and less expensive.

“Although Pacific yew is a beautiful wood, it is not considered a commodity,” he said. “Most logging companies just throw it away, or use it for firewood.”

With yew being so plentiful in BC, yet difficult to source, MacDonald said that in his years of bow making he has had to work at cultivating a yew supply network.

“Because I am so well known for my bows, people with yew pretty much seek me out,” he said. “My goal is to collect enough yew wood to make bows for several years yet, and not worry about sourcing the material.”

MacDonald’s bow-making skills are very much in demand, and he said he ships about 40 bows all over the world from his Lang Bay studio, at a price of over $1,000 each.

“It’s not easy to balance the bows by hand,” said MacDonald, indicating the 16 or so yew staves he has prepared for shipping to England ahead of the workshop. “You have to develop a good eye and feel for the wood.”

MacDonald will be hosting two four-day workshops in Birkenhead, UK on October 8 to 11 and October 15 to 18 as part of the anniversary of the battle Agincourt.

While MacDonald has led yew longbow-making workshops in Powell River before, the invitation to go to England is a first, as is the chance to set eyes on a historical bow.

“After the workshop there is a lot to see in England,” he said. “I would like to get a chance to see an actual historical English longbow.”

For more information about MacDonald and his yew longbows, readers can go to ravenbeak.com.