Display for a day 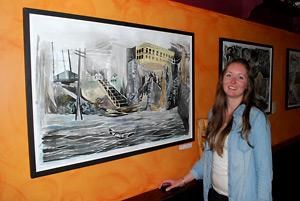 Any student will agree that school is all about deadlines. For Miel Creasey, the final project of her third year at Emily Carr University of Art and Design was no exception. She completed nine pieces in just over a month, all of which currently adorn the walls at Manzanita Restaurant for an art show set to open on Sunday, June 26.

In a college-like twist of timing, even her upcoming display is under some major time constraints. The restaurant announced last week that it will be closing its dining room at the Old Courthouse Inn effective June 27. For one day only, Creasey’s work will be on display at the restaurant for a celebration of both her paintings and their very temporary home.

Upon viewing the canvases on Manzanita’s walls, the show’s location makes perfect sense. Their subject is Powell River’s historic Townsite—everything from the Patricia Theatre to the Shinglemill Pub and Bistro to the hulks. Creasey calls the works contemporary historical drawings.

She created the collection using mixed media, bringing watercolours, ink, and photo transfer methods together to create a layered effect. She even incorporated photos from library archives into some of the pieces.

“I thought it was a perfect fit with this, trying to get that old photographic feel,” Creasey said. “I don’t think it would have been the same if I painted it.”

When she began the project, Creasey was more interested in capturing the architecture of the various buildings, but her focus began to shift. “Then it became more about the land and the settlement,” she said. “I’ve spent a lot of time up the coast in old homesteads and I find it really intriguing.”

Creasey has incorporated the settlement of first nations in her works as well. “My partner Erik Blaney is from the [Tla’Amin] Sliammon First Nation here,” she said. “I guess I’ve always had a fascination with the culture and the stories that I heard of what it used to be like.”

Each piece is a pictorial timeline of the various people and buildings that have come and gone in the area. Totem poles are juxtaposed against telephone poles while current buildings stand amid the ones they replaced. “I’m trying to capture different times,” she said.

Creasey said that the collection on display is a new direction for her in both subject and material. Her assignment required the use of ink in a drawing context, something she rarely used in the past. “I actually do a lot more painting,” she said.

In September, Creasey will return to the Emily Carr campus in Courtenay to finish her final year of studies in the bachelor of fine arts program. She said that the current pieces have inspired her to create more works in a similar theme. “It’s exciting because I have so many ideas for other areas that I really love.”

The art opening, entitled Perspective from Miel Creasey, will begin at 3 pm, 6243 Walnut St. Complimentary appetizers will be served to the music of the Sam Hurrie Trio. Interested readers can contact Creasey for more information at mielcreasey@gmail.com.