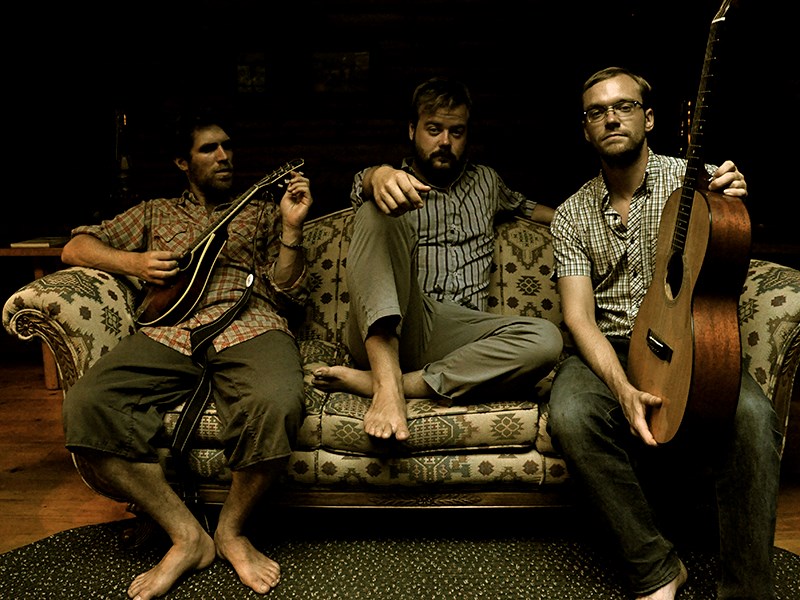 CROOKED FAMILY: The three members of The Crooked Brothers, although not actual brothers, spend enough time on the road and in the studio that they have become like family. The folk-rock trio performs this Sunday, February 28, at Cranberry Community Hall. Contributed photo

The danger of naming your band anything with the word “brothers” in it is that everyone will automatically assume the members are, indeed, brothers.

In the case of Winnipeg folk-rock trio The Crooked Brothers, although the three multi-instrumentalists in the band aren’t actual blood brothers, they might as well be.

“We don’t share any of the same parents, but we are brothers,” says Darwin Baker, who handles vocals, harmonica and a host of other instruments in the band. “We fight like brothers and we love each other like brothers.”

Now in their eighth year and having done numerous Canadian tours during that time, The Crooked Brothers’ humble beginnings as a side-project have all but faded.

The group was originally formed as a way to branch out the members’ respective playing styles by trying out new instruments, but is now their full-time gig.

“We started the band so we could play these totally different type of instruments that we were attracted to, and try some folkier stuff with vocal harmonies,” said Baker.

The band’s latest album, Thank You I’m Sorry, was recorded in both a warehouse and a handmade log home, giving it a more expansive sound than previous efforts. Recording technique is just one of the elements that sets the band apart from its folk contemporaries.

Folk music has experienced a mainstream resurgence in recent years with bands such as The Lumineers and Mumford and Sons, but Baker is quick to point out that The Crooked Brothers have their own thing going on, including some unexpected influences.

“We don’t do a lot of the four-on-the-floor, hey-ho kind of stuff, but we do bring some funky, skronky influences in, like Tom Waits,” said Baker. “Dr. Dre is also a big influence to me, personally.”

Although they haven’t been known to engage in any freestyle rap battles in their travels, The Crooked Brothers have met some steady allies on the road, including Vancouver-based folk artist Jenny Ritter, whose father Scott is on the board of directors for Cranberry Community Hall, where the band’s upcoming show takes place.

As for the band’s own perpetually frozen hometown, Baker said the music scene in Winnipeg is stronger than ever and includes some returning talent.

“It is cold, but a lot of people that move away from here end up moving back, and so many bands in Winnipeg start up because people really get along with each other here,” said Baker. “[Guitarist/vocalist] Matt [Foster] has this thing where he says, ‘Yeah, Winnipeg... nice place to live, but I wouldn’t want to visit.’”

The Crooked Brothers perform at Cranberry Community Hall on Sunday, February 28, starting at 7:30 pm. For more information go to starbuckna.com.