Performance tells tales of the past 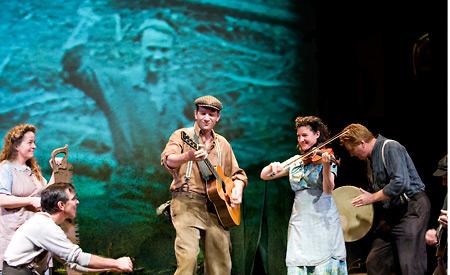 Good Timber: Songs and Stories of the Western Logger, for which Powell River’s own Tobin Stokes acted as musical director, is on tour and playing at Max Cameron Theatre from Tuesday, June 14 to Sunday, June 19.

The performance is a celebration of history and music surrounding the coastal heritage of logging. Less a play than a night of music, the performance uses old photographs and videos, traditional dress and stories and songs to present chronological snapshots of the history of logging and its cultural importance to the area.

The night will feature six musicians, all from the Victoria area, who play a variety of instruments including guitar, fiddle, mandolin and musical saw to capture the sound and the spirit of the logging days of yore. Most of the lyrics and inspiration for the music came from the poetry of Robert E. Swanson, who wrote poems about loggers starting in the 1930s. The musicians in the show and Stokes wrote songs specifically for the performance, again using the words of Swanson, while also incorporating traditional music.

Originating from the Other Guys theatre company in Victoria, the show ran last summer at the Royal BC Museum in Victoria and is now on the road. At the time of writing the show is playing in Shelton, Washington and Stokes said he is excited to bring it to Powell River. Some of the photographs in the show come from this area and Stokes said that for many here the performance will hit close to home.

“I think people will really connect with the logging culture, which is kind of slipping away,” said Stokes. “The younger generation may have a new respect for how their town was founded, the forefathers of Powell River, and what they were up against and what they experienced.”

Stokes believes that having an understanding of the history of where a person comes from leads to a better grounding and sense of identity. Stokes’s father worked in the Powell River pulp and paper mill now owned by Catalyst Paper Corporation and he had other relatives that worked in logging. He said working on the project helped him gain a better insight into his own history and the history of coastal BC.

During performances last summer Stokes said many people came up after the show to share that they had seen a relative, or even themselves, in one of the projected photographs.

“It’s good to know where you’re from and where a town is from and to know the ins and outs and the culture that was,” said Stokes. “It’s a really good grounding for more of an understanding of Powell River and a lot of these little communities, why they’re there.”

The show starts at 7:30 pm on Tuesday, June 14 and from Thursday, June 16 to Saturday, June 18. A 4 pm matinee will run on the Friday and Saturday and a 2 pm matinee on Sunday, June 19. Tickets are $20 for adults and $12 for children aged 12 years and younger. Tickets are available at Breakwater Books and Coffee, River City Coffee, Powell River Academy of Music and at the door.