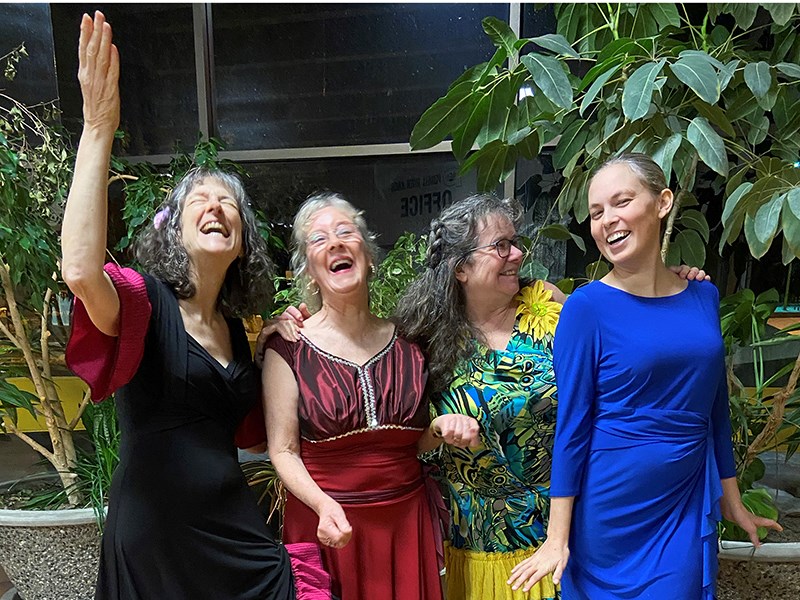 A play about four strong women is set to debut at Evergreen Theatre next weekend. Amateur theatre company Theatre Now! will present The Savannah Sipping Society for one matinee and two evening performances, and cast member Nicole Narbonne cannot wait to introduce the four southern belles to Powell River.

“This is a play about four strong women of a certain age,” said Narbonne. “I play Marlafaye, the divorcée, Trina Isakson plays Randa, the recently unemployed workaholic, Tina Thompson plays Dot, the widow, and Tricia Andrews plays Jinx, the life coach who needs coaching as much as anyone else. We’re mostly new to Savannah and single but not really by choice, and chance brings us all together to renew our zest for living.”

The play was written by Jessie Jones, Nicholas Hope and Jamie Wooten, who have written 20 comedies for theatre. The trio has a variety of stage, television and film credits, including Wooten writing for the classic sitcom The Golden Girls.

“Jones, Hope and Wooten have a reputation for writing funny plays that feature strong middle-aged to older women, and this play is no exception,” said Narbonne. “It is kind of a coming-of-age-into-menopause tale as we work our way through our various trials and misadventures. It’s a great fit for Theatre Now! because many of our actors are women in that age group, and it’s been hard to find plays that not only reflect what is going on in the world, but also have characters that line up with our people who want to act.”

Narbonne was clear that the play is not just for women.

“We recommend this play for both men and women, because it’s just so funny,” she said. “I think my character Marlafaye is the best, because I don’t have any straight lines. Everything I say is tongue in cheek, except for some very earthy things when things start to go crazy. And things do go crazy, over and over again.”

Theatre Now! has been producing plays in Powell River since the late 1990s. Narbonne joined the group in 1995 and acted in her first play in 1996.

“I love being on stage; I still get that feeling of stage fright, but it just makes me breathe and centres me,” she said. “I pull the energy from the audience through myself to bring out the character. I’ve been in plays where my friends commented that they wished they’d seen me up on stage, when I was up there the whole time. That makes me so happy, to be in character so far that people who know me don’t know who I am.”

The Savannah Sipping Society is directed by Brian Liddle, and also features pianist Al Dicken, who provides original music between scenes. Shows take place at 7 pm on Friday, February 14 and Saturday, February 15, and at 1:30 pm on Sunday, February 16.

Tickets can be purchased at River City Coffee, Powell River Peak, The Farmers Gate, or from any cast member.