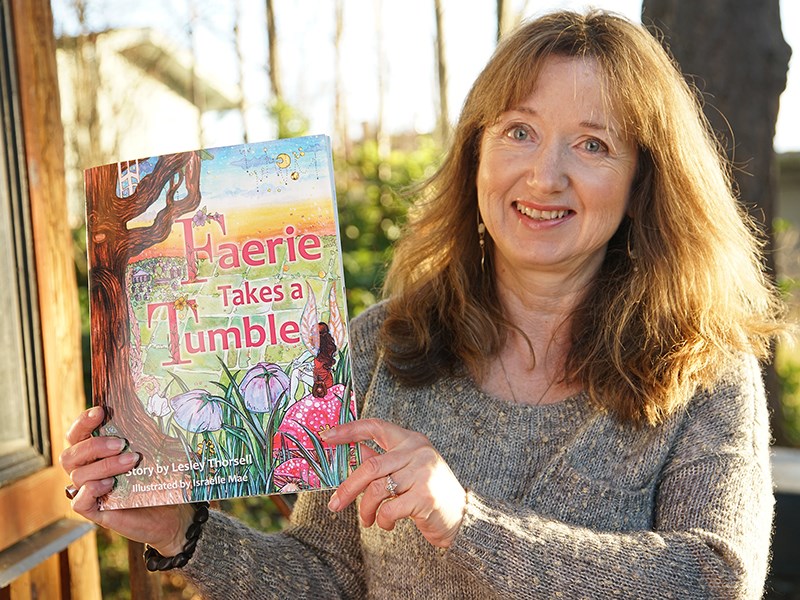 FIRST PUBLICATION: Writer Lesley Thorsell has published her first book, Faerie Takes a Tumble, which features several themes that Thorsell is passionate about. The book is written for young children and features messages about health of self and health of nature. Paul Galinski photo

Set in Ireland, Faerie Takes a Tumble tells the story of Mary the faerie, who has an accident, and the narrative provides an aftermath that explores themes of importance to Thorsell.

Thorsell said the book has been a number of years in the making. She said she was in a motor vehicle accident in 2014 and it was a few months after that she was travelling to see a friend, and while on the ferry, the story just came to her.

“The story encompassed everything that I love – Ireland, faeries, trees and protecting nature; all of that came together,” said Thorsell. “I advocate for those who cannot speak for themselves. However, the story kind of sat for a couple of years as I was going through my recovery.”

Thorsell said later, she was on the ferry again and ran into Israelle Mae, who eventually became the illustrator of the book. Mae is the granddaughter of Thorsell’s best friend Shelley Jahrig, who passed away in 2014.

“Israelle was sitting on the ferry, sketching characters, and I asked her if she would be interested in working on a book with me,” said Thorsell. “She was in grade 11 when I met her and for the next two years we worked on the story. It was brand new for both of us, so it took a little bit of time but it was worth it.”

To fortify Mae’s artistic confidence, Thorsell offered for Israelle to go to Autumn Skye’s Soul Portraits Painting Retreat and that opened things up.

“She went to Salt Spring Island for 10 days, surrounded by 28 other women, doing portraits of themselves,” said Thorsell. “It really builds your confidence and gets you to know who you are. I had also attended one in the past. They were very supportive of her and that helped build her confidence and personal style.

“That kind of catapulted the illustrating to the finish.”

The next piece of the puzzle was finding someone who could design the book. Thorsell was spearheading a project with Malaspina Land Conservancy Society of delivering 2,000 tree seedlings to be planted locally. When she was delivering the trees, she provided one to Melany Hallam.

Thorsell said she remembered Hallam because they worked together in 2010 on a calendar project for breast health awareness as Thorsell had gone through breast cancer. Thorsell was happy to bring Hallam onboard for the project.

At the centre of the story, Mary, the Irish faerie, gets a concussion, which is what happened to Thorsell after her motor vehicle accident.

“With the headaches and the confusion that I went through, I felt that there was very little information about that,” said Thorsell. “It dramatically affects a person. I wanted to touch a little bit on that for children and talk about recovery, healing ourselves and healing nature. Those are two things that have been important to me my whole life.”

Thorsell said beyond the injury, an important theme in the book, as the story unfolds, is that humans are connected to the earth, and what we do to the earth, we do to ourselves. As the story progressed she incorporated concerns for old-growth forests and using pesticide in the forests as she is a member of Pesticide Free Powell River.

Real people are also featured in the book. There is a reference to a doctor and Thorsell said it was based on 95-year-old Dr. Frank Murphy, who is from Ireland but has lived in Powell River for many years. Other Powell River residents upon whom characters in the book are based include reiki masters Phil Russell and Maggi Bereziak, plus Dragonfly Touch neurofeedback practitioner Alene Norris.Also, a friend of Thorsell’s from Ireland, Lucy, is featured in the book.

Thorsell has been to Ireland twice and she loves it.

The book is written for children. Thorsell said she reads it to her year-old grandson and older children would enjoy reading it themselves.

The book was published in December 2020. Thorsell said she got a little elf hat and, with her partner Tracy, delivered the book around the community, having sold about 150 copies. Some have been sold overseas in England, Ireland, Australia and one is going to Germany. International sales have been made through her website at forestfaeriebooks.com. This is her first publishing endeavour.

Thorsell said she is pleased with the end result.

“It looks great,” she added. “Melany knew I wanted a whimsical theme and she delivered.”

A portion of the proceeds of the book will be supporting two organizations. Some of the money will go to Powell River Orphaned Wildlife Society (PROWLS). Thorsell said that last year, more than 460 birds and wildlife were saved by the organization.

“They want to build an animal hospital so I want to give proceeds to that,” said Thorsell. “[PROWLS president] Merrilee Prior is the Jane Goodall of Powell River.”

Money will also be going to TreeSisters, an international organization of women devoted to the planting of trees. They have planted 15 million trees so far globally and Thorsell donates to them every month.

Thorsell said being able to support both organizations makes her feel really good.

“People can buy the book and enjoy it and know they planted a tree or saved a bird,” she added. “The book is about giving back and about nature, healing ourselves and healing the planet. Israelle and I love working together and have been discussing book number two. The story continues.”