Evening of modern repertoire in Powell River will champion music of BC composers
May 29, 2018 9:52 PM By: Andy Rice 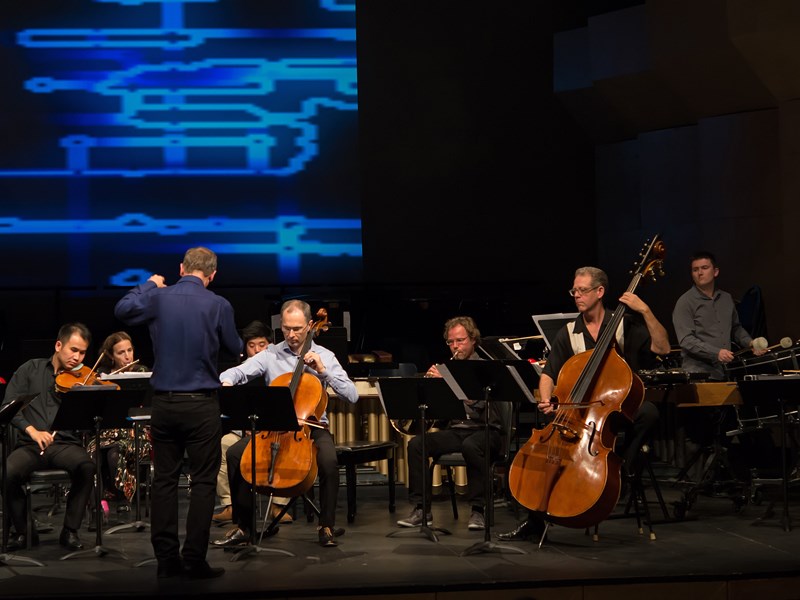 Sure, they get to wail on expensive objects and provide some of the most memorable sound effects for favourite classic orchestral works (think Mahler’s Sixth Symphony, Stravinsky’s Rite of Spring or Bernstein’s West Side Story), but most of the time, classical percussionists find themselves playing second fiddle to the violins.

Opportunities to claim the spotlight are, one might say, a little hit and miss.

That is precisely why Pacific Region International Summer Music Academy (PRISMA) Festival organizers have added a special concert to their summer 2018 lineup. Voices Rising will take place on Wednesday, June 20, at Evergreen Theatre and be devoted exclusively to PRISMA’s five-member percussion section, a handful of faculty guests and the music of four BC composers.

The event builds on the success of 2017’s Raven Tales, a concert that followed a similar model. It was the brainchild of PRISMA maestro Arthur Arnold and Bill Linwood, one of the academy’s longest-serving faculty members.

“The response was excellent last year; we had a really good audience and people were engaged with the program.” said Linwood, who is also principal timpanist with the Victoria Symphony and curator of its popular Explorations of Contemporary Music series.

“It was so exciting because it was much more experimental [than other concerts at PRISMA],” said Arnold. “It was the alternative; the indie or the artsy approach.”

Voices Rising will feature a wildly different instrumentation for each piece, ranging from a lone snare drum at centre stage to a nine-member chamber ensemble.

The breadth of genres and influences is quite staggering, said Linwood.

One work by Gavin Bryars employs a small army of keyboard percussionists. Another by composer Tony Genge, who performed in Powell River recently during Townsite Jazz Festival, seeks inspiration from the gamelan groups of Indonesia.

“Gamelan is one of the original kinds of percussion ensemble,” said Linwood. “The piece is sort of built on these revolving motivic and rhythmic patterns using a Balinese collection of instruments like gongs, small cymbals and metallic xylophones. It’s incredibly complex, yet it appears quite simple as you’re listening.”

Linwood will perform on the aforementioned snare drum, delivering a work by Juliet Palmer that also features a spoken word component.

“The whole premise of the piece is looking at the truth from different perspectives and how we tend to perceive the truth in today’s society,” he said.

Quotes from Theodore Roosevelt, Barbara Bush and the Bible will be woven among snare rudiments from the American Civil War era to create a thought-provoking soundscape.

“It’ll make you look at percussion in a completely different light,” added Linwood.

Remaining pieces come courtesy of Marcus Goddard, another veteran PRISMA faculty member and longtime associate principal trumpet with the Vancouver Symphony. One, called “Solus,” is written for a single trumpet and live electronics. No two performances of this composition are alike, due to the improvised bed of sounds created by Goddard’s improvisations into a loop pedal.

For Linwood, supporting and shedding light on the works of BC composers is part of a larger responsibility to secure the future of an art form he holds so dear.

General admission for Voices Rising is $15 and free for PRISMA passholders. The concert takes place at 7:30 pm on June 20 at Evergreen Theatre. A cash bar will be open before the performance and there will be no intermission.

The 2018 PRISMA Festival runs from Monday, June 11, to Saturday, June 23, with six other symphony and chamber concerts to choose from. For a full list or to purchase tickets, go to prismafestival.com.