Short film made by students in Powell River wins prize 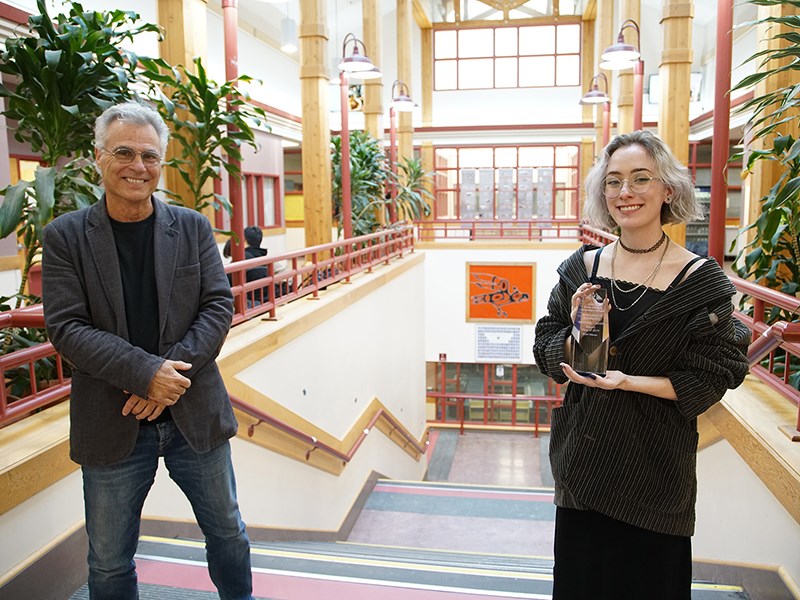 PROUD PAPA: Powell River Digital Film School instructor and mentor Tony Papa, and student director Macy How, were recipients, along with a group of students, of a prestigious award and a cash prize for the production of The Emergency Brake. The short animated film carried an environmental message and was narrated by young climate activist Great Thunberg. Paul Galinski photo

According to digital film school instructor and mentor Tony Papa, the film is a short animation project involving the entire film school class, featuring a strong environmental message. The film was animated to audio excerpts from a speech by world-renowned environmental activist Greta Thunberg.

Papa said the latest award was from the Kimberley Foundation in the category of excellence in documentary/public service announcement filmmaking.

“The film won the top prize, in which $2,000 was also awarded to the film school for the accolade,” said Papa. “Macy How and Ariyah Reuven represented the film in their positions of director and producer respectively, and both were awarded winner trophies on behalf of the class, as well as the school.”

Earlier in the year, the world streaming news organization called Now This picked up the film for distribution, according to Papa, who said the organization has millions of viewers. He said Now This was alerted to the film at the 2019 National Film Festival for Talented Youth in Seattle, where the film won best animation (student) at the festival.

“It’s just been going for two years,” said Papa of the awards the short film has garnered since its release. “The jury is still out on some of them,” he added, speaking of other competitions the film has been entered in. “It has been selected in 12 festivals, which is a big thing.”

The festivals have been all over North America.

Winning these festivals is good for the students in that they are invited to the screenings, and sometimes their expenses are paid, said Papa.

“They can forge bonds with other filmmakers and/or industry professionals who can give them insights to their next steps in their journeys,” said Papa.

“It’s an environmental piece and it really rung a bell all over the world,” said Papa.

How, in terms of her directing, said putting the film together was a collaborative effort. She said she helped come up with the idea for the film because outside of the film school she was involved in putting together an independent youth environmental group.

“I brought that conversation to the class and Tony told us to run with that,” said How. “We took inspiration from Greta Thunberg. That’s how it started.”

Papa said production involved a week of instruction with an instructor from Emily Carr University of Art and Design. He said students were concurrently working on a drama so putting together The Emergency Brake took about four weeks. Run time on the film is five minutes. Thunberg’s speech was taken from public domain YouTube and edited.

How said the message for the production was driven by tensions being high over the state of the environment and the class wanted to speak as young people that they were afraid for their future.

“We wanted people to understand that this was a really, really important and urgent message and that we need to change our ways,” said How. “We need to think about the rest of our lives and our future. It was in our eyes and our words.”

Papa said the film really gets across the message that How outlined.

“To pull that off is not easy,” he added.

He said in overseeing the project, he knows what it is like to meet a project’s deadline. Early in the production, there was a tendency not to know the intricacies of the production process, and at the end of it, there was a bit of a cram to get it all completed.

“My role is as an executive producer and I am giving them the opportunity to do what they need to do, but they need to do it. I needed things to be completed in the time that was allotted because our time in the film school is finite.”

How said she is more than pleased with the end result.

“You really don’t know what the final product is going to look like because everyone is working sort of individually and they all have their own ideas and their own visions,” said How. “It’s hard to see how it will mesh, but the way we worked as a group, we all communicated our ideas. It flowed so well from Greta’s narrative. It was phenomenal. It was beautiful.”

Papa said there was some great attention to detail through the whole project, which showed in the finished product.

How said attending film school was “very worth it” and she’s “super proud” of everything that was accomplished.

“I learned so much,” she added. “It was a new creative outlet for me. I always wanted to do script writing but never had the chance to.”

The Emergency Brake can be found at vimeo.com/349167014. Powell River Digital Film School’s website is prdfs.ca. “I’m really proud of the work these guys do,” said Papa. “It’s not easy, but sometimes, they really hit it.”