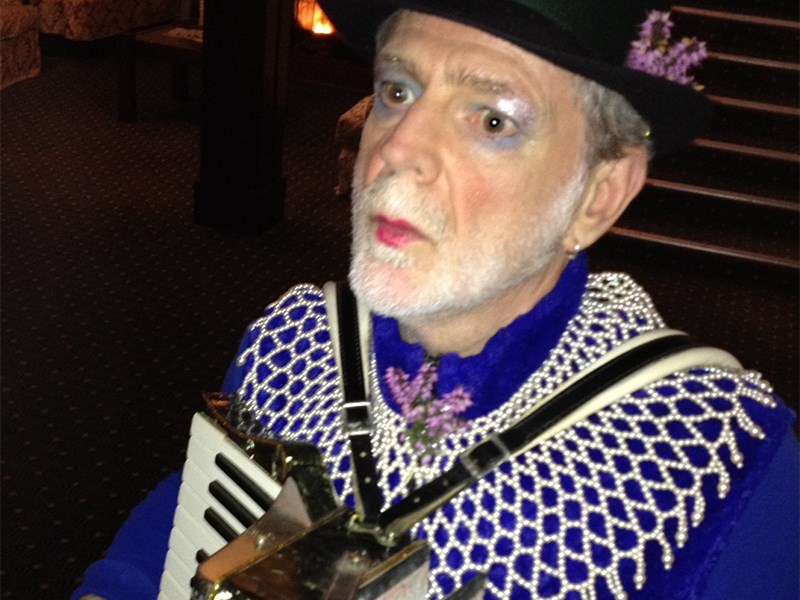 Accordion virtuoso Del Riviera (real name: David Roundell) once toured in a 50-piece accordion band playing two solo numbers, “Lady of Spain” and “Moon River.” That was just one of many unusual stages Riviera’s career has taken. The 65-year-old Powell River resident has spent his life in show business, as an actor, vaudevillian, street performer, jazz improviser and composer. He is best known around town as an accordion player and member of Slim Milkie Band.

When did you know you wanted to play the accordion?
I was about 11 and answered the door to a door-to-door salesman standing there with two cases. He said, “I’m here from the Royal Academy of Musical Arts and we’re selling accordion or Hawaiian guitar lessons.”

Did you let him in?
I had my foot in the door so my mother couldn’t close it. She had to invite him in. He sat me down, numbered my fingers one to five and said, “When I say the number, you play the tune.” It was “Three Blind Mice” or something. He said, “Oh my dear Mrs. Roundell, your son shows great promise.” The rest is history.

Was there ever a time you wanted to stop?
When I turned old enough to be embarrassed. From the time I was 16 to about 30, I did not touch the accordion. Then I was asked to put on a benefit review for Victoria’s Belfry Theatre. I created a satirical country band called Red Tucker and the Rhythm Ramblers from Biloxi, Mississippi, and decided Red had to play the accordion. That was it. I fell in love with it all over again.

How many accordions do you own?
I own eight. My most expensive is a Stratavox Eldorado with tube chambers that elevate the sound; it is worth about $4,000. My Alberto Vinzi from Milan, Italy, was made in about 1938. I knew I was going to get that accordion from the MCC Thrift Shop because every time I went in there I’d give a little concert. I fell in love with it and had to have it.

Where does the name Del Riviera come from?
When we bought our house, I said to my partner that we had to name it. So I came up with Del Riviera. Then, after being up here and meeting the community, I realized, “What’s with all of these people who have pseudonyms? They all have aliases.” I’ve performed a lifetime under alter egos, as well as my own name, so I’ve always had characters, like Red Tucker, a sleazy impresario named Jimmy Schmooze and a lounge persona I called Art Shot.