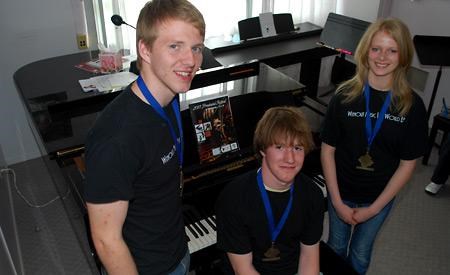 As the African proverb says, it takes a whole village to raise a child. The community of Powell River has always been something of a collective parent to musicians, supporting them from a young age, watching them grow, and then letting go just a little as they enter the world on their own.

The musical children of Powell River—some of them now with children of their own—did their village proud with an impressive representation at this year’s Performing Arts BC Provincial Festival. Eleven designates were eligible to compete after qualifying at the Powell River Festival of Performing Arts earlier this year. They joined participants from other local festivals around the province for the event, held earlier this month in Kamloops.

By the time the provincial festival came to a close, eight of these competitors had received honours and were making room in their suitcases for certificates and even medals.

Runner-up honours went to Steve Carson in the Junior Woodwind category, Lynne McDonald for Junior Brass, and the Academy Chamber Choir in the Community Choir category.

After competing on June 7, the Schweitzer-Hocking Trio took home first place medals in the Intermediate Chamber Group category. This was the trio’s fifth year competing at the provincial level and its first win, although it went home with the title of runner-up or honourable mention after each of its past visits.

Provincials have become somewhat of an annual excursion for the group and its teachers. “It’s kind of like a fun road trip,” said Madeline. “I like performing and seeing all the competition. The whole thing is just a really great experience.”

The Powell River Festival of Performing Arts is a crucial step for the group in its quest to compete at the provincial and national level. The annual competition, organized by Rotary Club of Powell River, is also where the idea for a student chamber music trio began. Harris remembers Madeline’s mother Deborah pitching the idea several years ago after watching members of the group compete individually.

Over the past year, the Schweitzer-Hocking Trio has been busy performing at various competitions and events, including opening for Trio Accord at Academy Hall this past November. In March, the group competed in the Young Musicians Chamber Music Competition in Vancouver, organized by the Friends of Chamber Music Society.

At provincials this year, the trio played a 20-minute program that included a “very unique” piece by composer Paul Schoenfield entitled Café Music. “I think that was the piece that really clinched it for us,” said Harris.

The group admits the score was difficult and slow to take shape at first, but after weeks of perseverance, it had a new favourite in its repertoire. “I think it’s a great piece,” said Tereshchenko. “We took a risk.”

While playing difficult music in a competition setting has its challenges, the group agreed that the “little things” are what hang it up the most on the road. Often, these occurrences are completely unrelated to the music—“peripheral things that you don’t expect,” said Harris.

During their most recent trip to provincials, Eli and Josiah had to send their mother Fran on a frantic hunt for black socks. She returned from a nearby drugstore with diabetic compression stockings just minutes before their performance began.

“Those were actually really comfortable,” said Eli, who was still adjusting his pair on the way up to the stage while Madeline hurriedly borrowed a Hello Kitty hair clip from one of his younger sisters.

Whether at a performance or in practice, the trio manages to have fun while making good music together. “We just enjoy playing, the progress and just how far we’ve come is satisfying,” said Josiah. “It feels good.”

Their teachers are enjoying the journey as well.

“It’s just a treat to work with three kids who are so motivated,” said Harris. “Each one in their own discipline works very hard, and that’s what brings the trio up to the standard that it is because they’re so dedicated to their own music as well.”

“Dedicated students are nothing without dedicated teachers,” said Eli, quick to acknowledge the role Harris and Tereshchenko play in the group’s success. “There’s really five members of this trio when you think about it.”