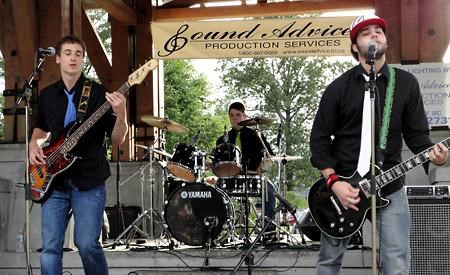 Ben Wittrock, grade 11, guitar, Chris Brinton, grade 10, bass and Wes Oram, grade 11, drums, make up the Brooks Secondary School-formed band that is making a name for itself with its energetic, kinetic sound and live shows.

Taking to the stage at Simms Park the Powell River boys rocked the crowd with three original tunes and a tight cover of Rush’s “Limelight.” Superjuice had the crowd headbanging to originals “You and I-Oh” and “Lifetimes” and at the end of the event the young musicians were announced as victors.

“We were kind of shocked at first actually. It wasn’t sinking in,” said Chris.

Six bands in total played at the event, put on by the Comox Valley’s July 1st Committee.     Ben and Chris agreed that at least four of the bands that competed were excellent and that they did not think they were going to take the title. Campbell River’s Rise With the Falling came in third place, while Fiftieth Parallel, again from Campbell River, came second.

Along with the honour of being named top band, Superjuice won four days of recording at Dove Creek Studios in Courtenay, free production of an in-studio music video, rotation on a local radio station and a 45-minute slot in the lineup for Courtenay’s Canada Day celebrations.

Superjuice formed in the music rooms of Brooks in October 2010 when Ben, taking a guitar class at the time, decided to recruit some peers and form a band. Chris came on as one of the only bass players in the school, although Ben is quick to explain he’s also a great musician. Wes Oram, who the rest of the band describes as a human metronome, came on board, providing exact, unwavering tempo on the drums.

Ben describes the power trio’s sound as punk-funk-rock, a sound influenced as much by modern bands like Red Hot Chili Peppers and Green Day as classic rock acts like Rush and Aerosmith. Band members say the experience of playing in the group and winning the Battle of the Bands has been incredible.

“I love it, it’s what I want to do with the rest of my life,” said Ben. “Just making music and doing what you love, it’s just great. Especially when you write music or make music and other people love it and dig it, you just vibe the energy off each other.”

Recently the band also produced a demo CD, titled SSS, at Powell River’s The Music Room that they handed out to industry types at the event and will sell at shows.

Superjuice will be playing at Sea Fair on Saturday, July 23 starting at 8:30 pm at Willingdon Beach. Demos and swag will be available at the show. To listen to tracks check out the band on Facebook or at ReverbNation.com.