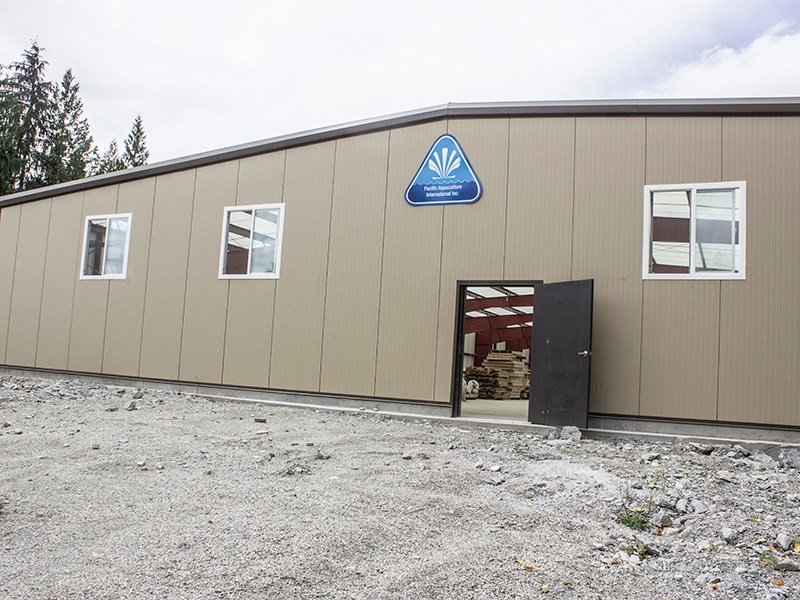 OPEN FOR BUSINESS: In addition to a hatchery, which is now operational, a new Pacific Aquaculture International facility near Saltery Bay will eventually produce shellfish for overseas and domestic markets. The company’s local headquarters opened on Monday, September 19. Chris Bolster photo

Pacific Aquaculture International officially launched its North American headquarters near Saltery Bay on Monday, September 19, announcing its plan to expand its land-based operation into one of North America’s largest shellfish hatcheries within its first four years.

Working in conjunction with Hummingbird Cove Lifestyles, the company’s primary functions at its 34,000-square-metre facility will include shellfish research and development, a hatchery, production, marketing and exports.

The first phase of the company’s operation has begun with the hatchery. A second phase of the project, slated for completion in 2020, will produce, market and export mature shellfish products.

Pacific Aquaculture will start by harvesting scallops, but also has a federal commercial fishing licence for 23 other shellfish species, including clams, geoducks, oysters and mussels. It will not raise or harvest any fin-fish species, according to a media release.

The company is a subsidiary of Linghai Shenziting Sea Cucumber Hatchery, the leading seafood farmer in China’s Liaoning province. Pacific Aquaculture’s site in Powell River is headquarters for the parent company’s international business.

“We chose Powell River because of its geographic location between the city of Vancouver and the areas of the coast that we believe will be best for the shellfish-growing farms,” said Hummingbird Cove Lifestyles consultant Dan Dyble.

More than $10 million has already been invested in the construction of the state-of-the-art hatchery and an investment of another $40 million is estimated over the next five years, according to the release.

Dyble says local contractors have been used “extensively” to build the first phase of operations and the company intends to continue that for future phases. A projected 30 to 50 job positions are expected at the facility.

“We know that the employment we are providing will represent employment in many areas and expertise,” said Dyble.

Shellfish produced at the facility will be exported to China, Europe and North America. A processing facility will also make product available for the local market in Powell River, said Dyble.

Powell River Regional District Electoral Area C director Colin Palmer said his constituents have expressed various concerns about the project ever since Pacific Aquaculture acquired the land and began construction on the site, but he currently sees no reason to oppose the project.

“I haven’t found anything yet about it that disturbs me,” said Palmer. “People have given me their concerns; I’ve gone down there and talked to the owners and their consultants and nothing has happened so far that would cause me any deep concern about what they are doing.”

Owners Xi Ping Ding and Zhiyi Chen faced several months of delays with the project as they navigated government licences and approvals.

Pacific Aquaculture has also announced a partnership with Liaoning Ocean and Fisheries Science Research Institute to host a research centre in Powell River, the institution’s first overseas research base in Canada, including an education component with local educators.