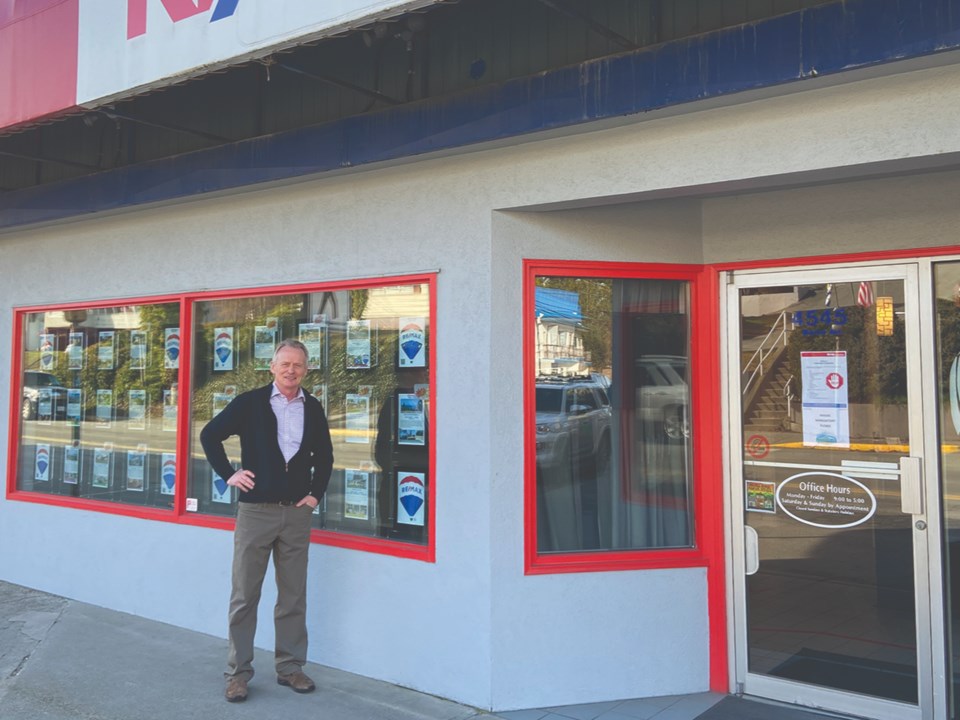 2021 is a landmark year for RE/MAX Powell River, with several significant anniversaries taking place over the next few months, and broker Ron Ostensen is looking forward to celebrating them with all his friends and neighbours in Powell River.

“This year I’ll have been back in Powell River for 20 years,” says Ron, “and it will be 10 years since I purchased the RE/MAX brokerage from my dad. It’s been an amazing journey, and I’m looking forward to the next decade.”

Ron came to Powell River from Australia in 1973 with his family. His father, Willy, took a six-week compositor contract with the Powell River News, and never left. He eventually became a realtor, a job he’d done in Australia, and then later had his own brokerage. Meanwhile, Ron graduated from Max Cameron Secondary School and then spent 20 years living and working in the Fraser Valley.

“In 2001, my dad was starting to think about retirement and an exit strategy,” says Ron. “I had a good career as a commercial gasfitter, but the three hours commuting every day were starting to take their toll, so my family and I decided to move back to Powell River.

“It was that year the brokerage became a RE/MAX office, so this is actually the 20th anniversary for RE/MAX Powell River as well.”

Ron loves Powell River and everything it has to offer, which makes it much easier for him to be an ambassador for people who come from out of town to purchase property.

“The first few months after we moved back, I realized that I actually had evenings and I didn’t know what to do with them,” explains Ron. “When I was a gasfitter, I would be away from home for 12 hours or more at a time because of the commute, but in Powell River, I could work an eight-hour day and only be away from home for eight hours and 15 minutes. It was such a novelty!” he adds with a laugh.

2020 was an unusual year for everyone, and the real estate industry was no exception.

“With COVID, we’ve had to do some things that make our jobs a little harder, and some that make it easier,” says Ron. “Now we meet clients at the properties we show them instead of taking them in our cars; we ask homeowners to leave some closet doors open so we reduce what we touch; and we ask only the buyers to come into the houses with us.

“But people do still want to see the homes in person. You can look at all the pictures you want, but people still know when a house is right for them when they step inside.”

Like Ron, many new Powell River residents come from the Lower Mainland, both retirees and, more recently, families with young children.

“They come here for the lifestyle, which I totally understand,” says Ron. “When we lived in Mission and wanted to spend a Saturday at the lake, we got up early and drove over an hour, and still had to just hope we could get a parking spot and a nice place on the beach.

“In Powell River, we can drive for 10 minutes to a great, not-busy beach, or drive for half an hour and be the only ones by the water. It’s definitely a lifestyle worth living.”

The Powell River RE/MAX office has 10 realtors on staff involved in house sales, rental management and strata management. Many of the staff members have been around Powell River for a long time; office administrator Diane McAdam retired in 2017 after being with the office for 42 years.

“Diane was a big fixture here; I like to say I inherited her from my dad,” says Ron. “Diane was emblematic of our office – we’re passionate about and committed to Powell River, and we believe in the work we do and the community we live in.”

RE/MAX Powell River is located at 4545 Marine Avenue. To find out more about the services offered, the office can be reached at 604.485.2741 or info@remax-powellriver-bc.com.