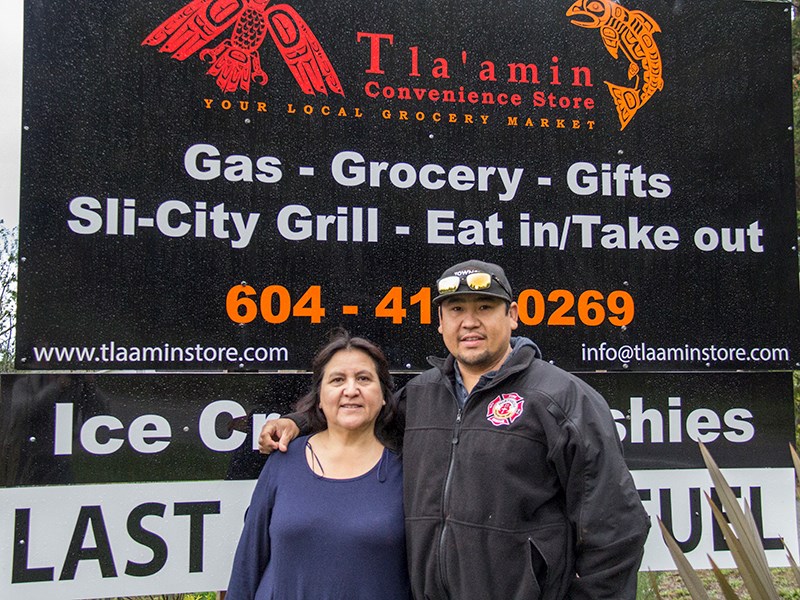 MOM AND SON: Tla’amin Convenience Store co-owners Eric Blaney and his mom, Gail, along with Eric’s wife Miel (not pictured), will attend the BC Aboriginal Awards in Vancouver on October 19. The store is being recognized for outstanding business achievement. Dave Brindle photo

Since opening in July 2014, Tla’amin Convenience Store has been accumulating business awards like banners in the rafters of a hockey rink.

Eric Blaney, the store’s co-owner, will receive a BC Aboriginal Business Award for outstanding business achievement at a gala dinner ceremony in Vancouver on October 19.

In 2015, the store was the Horizon Business Awards recipient for beautification from Powell River Chamber of Commerce. That was followed by BC Small Business Awards recognition for being in the top five in the entrepreneur of the year category as first runner-up and second runner-up in best community impact, which recognizes socially responsible businesses.

Awards the store has been recognized for are related to the important place it holds in the community, said Blaney.

BC Aboriginal Business Awards were launched in 2008 to honour and celebrate business excellence. A total of 15 aboriginal businesses, entrepreneurs, partnership entities and community-owned enterprises will be recognized at this year’s gala dinner.

“They’ve done a lot of entrepreneurial innovation to serve the first nations in their community and they do an enormous amount of giving back,” she said.

Blaney said the business would not be where it is without its clientele.

“They are the ones who put us here,” said Blaney. “In order to receive this award, we have to be nominated by people in the community or organizations. We appreciate those nominations and we appreciate the community for coming in and making us the business we are today.”

Blaney said part of his business model is cultural authenticity that begins with the name of the store, taken from the Tla’amin language.

“Most people still call it Sliammon because that’s what they’re used to, but Tla’amin is who we are and we’re proud of that,” he said.

“We want to lose the stuff made in China,” said Blaney. “We’re looking for art made locally and in Canada by first nations people.”