Program needs an overhaul, says director of properties, development and communications
Apr 27, 2020 11:41 AM By: Paul Galinski 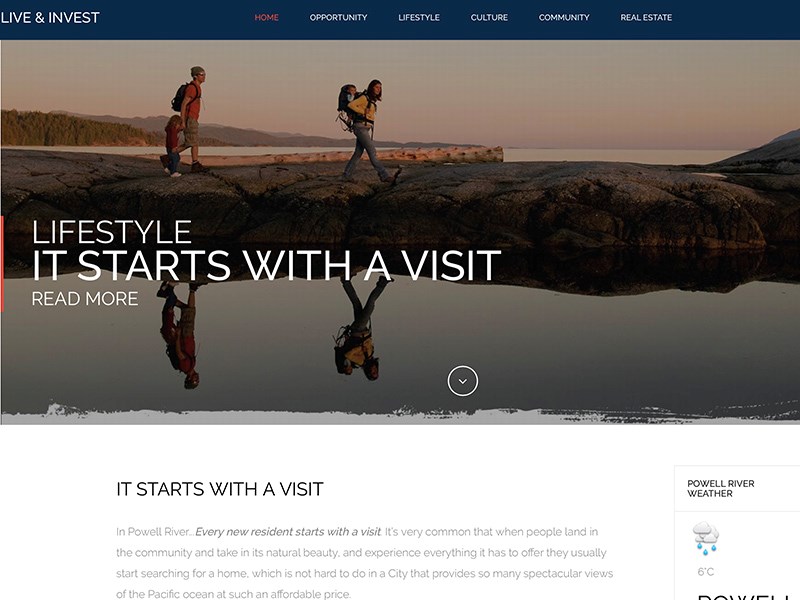 OVERHAUL CAMPAIGN: Powell River’s resident attraction campaign needs a refresh, so City of Powell River will be applying for funding to update the website (above).

City of Powell River will be applying to the Island Coastal Economic Trust (ICET) economic development readiness program for $10,000 in matching funding to complete a refresh of the Powell River resident attraction campaign.

At the April 23 city council meeting, director of properties, development and communications Scott Randolph outlined the need to provide the six-year-old resident attraction campaign an overhaul and new focus.

Randolph said in 2014 the city launched the campaign, which used a wide range of digital media tools to market the community for new residents. He said the focus was attracting younger people to the community, who could do their job or operate their business from anywhere.

Randolph said it has been six years since the resident attraction campaign was launched and it needs an overhaul.

“We want to change our messaging and our focus and we think we need a new marketing strategy and communications plan for the campaign; it’s time to do that work,” said Randolph. “We’ve set aside money [$10,000] for that in this year’s budget to do that work. We estimate it is going to cost about $20,000.”

Randolph said work for the campaign will be broken down into four phases. The first is research, and he said the city needs to understand who to market the campaign to and who the audience is. Because of COVID-19, he thinks things are going to change.

“One of the things we’re hearing is the way we work is going to change,” said Randolph. “Remote work is going to become a norm. As a result of that, we believe a lot of people are going to be leaving urban locales for safer climes, which provides us an opportunity and we need to be ready.”

Randolph said the plan calls for developing a communications and marketing strategy, understanding which tools will be used and what the messaging should look like.

“How do we have a roadmap ahead of how we are going to operate and get the best bang for our buck?” asked Randolph.

The next phase is doing the work, which includes upgrading the website and overhauling social media channels.

“At the end, we are looking for $10,000 from ICET,” said Randolph. “We have $10,000 already in the budget so this has already been budgeted for this year. I’m just looking for approval to make an application for this money, from ICET.”

Mayor Dave Formosa said he had been sent an article that indicates after COVID-19, people may want to come to smaller communities that are a nice place to live and safe havens. He said with regard to the strategy, he believes the city is thinking correctly with regard to the resident attraction campaign and he supports the application.

Formosa said he has been in touch with a corporation actively looking at locating some of its operations to Powell River and one of the things it is requesting is use of the resident attraction campaign tool. Formosa said the corporation is going to put out feelers for a small operation.

“One of the things they are looking at is putting out feelers for people to move to this city for jobs,” said Formosa. “This tool will be used. If they have good luck and people say they will come to Powell River and work, there is an opportunity to move their operations into our community.”

Randolph said the resident attraction campaign has been built using local talent. He said it is one of the reasons why the city won a BC Economic Development Association marketing award when it was launched in 2014. The same thing will be done with the refresh, using local professionals, Randolph indicated.

Councillor CaroleAnn Leishman said she is in favour of the application. She said she has met people who have moved to Powell River because of the resident attraction campaign, including city sustainability planner Ana Lukyanova, who was searching for a place to move and found the video testimonials on the campaign site.

“She came here for three weeks to check it out, fell in love with the town and she and her husband moved here,” said Leishman. “It’s an excellent idea if we reestablish it.”