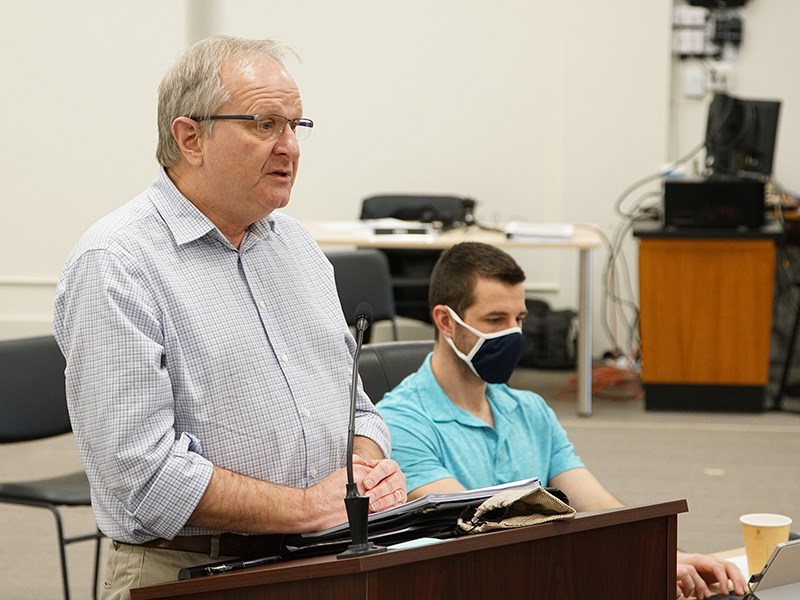 OUTLINES UPGRADES: Director of parks, recreation and culture Ray Boogaards providing the city’s finance committee an overview of a plan to rehabilitate Powell River Recreation Complex to serve the community another 20 to 25 years. Paul Galinski photo

City councillors were given an outline of how Powell River Recreation Complex can be rehabilitated to serve the community in the years to come.

At the February 25 finance committee meeting, director of parks, recreation and culture Ray Boogaards said he was appearing to discuss the rehabilitation plan for the facility.

He said the recreation complex has been in place since 1975. He added it’s estimated in non-COVID-19 times that up to 65,000 people use the building monthly and 780,000 annually.

“We all know this facility is the sports, recreation and social hub of the community,” said Boogaards. “Many local governments, when looking at their aging facilities, either look at replacement or updating. Many wealthier local governments may look at replacement, but we already have such a great facility. We are better off updating it. We know the facility will last for many years to come.”

Boogaards said when considering replacement or upgrades to facilities, several factors have to be taken into consideration, including: aging infrastructure, functional obsolescence, demographics and accessibility.

Boogaards said residents of the region are fortunate to have a facility like the recreation complex.

“For a community our size, the amenities included in the facility are extremely important,” said Boogaards. “When we look at our community versus other small communities, it is an extremely large facility and the public does take advantage of the facility. The benefits of recreation are so many.”

“Given the age of the recreation complex, it is important to determine if upgrading the facility would be the most cost-effective way of making sure the building will last for a while, or replacement,” added Boogaards.

He said the architectural firm commissioned to do the rehabilitation plan, and the parks and recreation department, think this building will last 20 to 25 years more years. In a report to the finance committee, Boogaards stated it was suggested upgrades be made to suit changing demands, demographics, accessibility and building code requirements, to extend the life of the complex.

Implementation of all recommendations for rehabilitation of the building listed in the architect’s report at one time would be a significant financial and operational challenge, said Boogaards.

“We don’t recommend it,” he added. “To shut down the facility at one time would put the facility out of service for a significant amount of time and would have a huge impact on the community.

“Completing all the projects in phases is probably the best way to do this. It might cost a little bit more in the long term, but when we look at completing the project in smaller pieces, grant opportunities can address those. When you start looking at applying for a really large project, chances are very slim you are going to get everything. If you break it up into smaller projects, you might stand a chance of getting more funding.”

Costs to reach just over $25 million

To carry out all recommended upgrades, the cost estimate is a little more than $25 million, according to Boogaards. He is recommending a phased approach, when major grants are announced. There are seven phases recommended, stretching from 2021 to 2025.

“Overall, I’m highly recommending that council adopt the rehabilitation plan and that you also consider some of the funding options included in the report,” said Boogaards. “I’m also highly recommending a reserve account be established for the recreation complex, because we do need funding in place for when grant announcements are made. Creating that reserve account would make it a lot easier to proceed with a lot of these grant applications.”

Mayor Dave Formosa asked if all of the identified projects were “shovel ready.”

Boogaards said all that needs to be done is to get the architectural work done on them. He said to be truly shovel ready, everything has to be in place and completed.

“For us to do that, we would have to invest a significant amount of money,” said Boogaards. “Instead, we invested in a study that shows there is a lot of community support for this.”

Boogaards said in the costing for the various phases, a design cost has been factored in.

Councillor Jim Palm said he likes the way Boogaards laid the recreation complex rehabilitation in phases. He said the current grant application the city has in is for the first phase, amounting to $6.6 million. He asked in order to get that approval done, if Powell River Community Forest will have to be consulted for supplemental funds.

Boogaards said there has already been approval from the community forest for the city’s portion.

Finance committee chair George Doubt said Boogaards is asking the committee to approve the rehabilitation plan to include the project and costs outlined for the five-year plan so the city can point to granting agencies to indicate this is a serious plan. He added that staff is recommending a reserve to include the recreation complex.

“Those are all good ideas,” said Doubt. “I’m in favour of it and I think we should support it.”

The finance committee referred the Powell River Recreation Complex rehabilitation plan to city council for approval. It was also recommended that staff be directed to include recommended projects and costs as outlined in the plan to include in the city’s 2021 to 2025 finance plan, plus prepare amendments to the reserve policy to include establishment of a recreation complex reserve account.