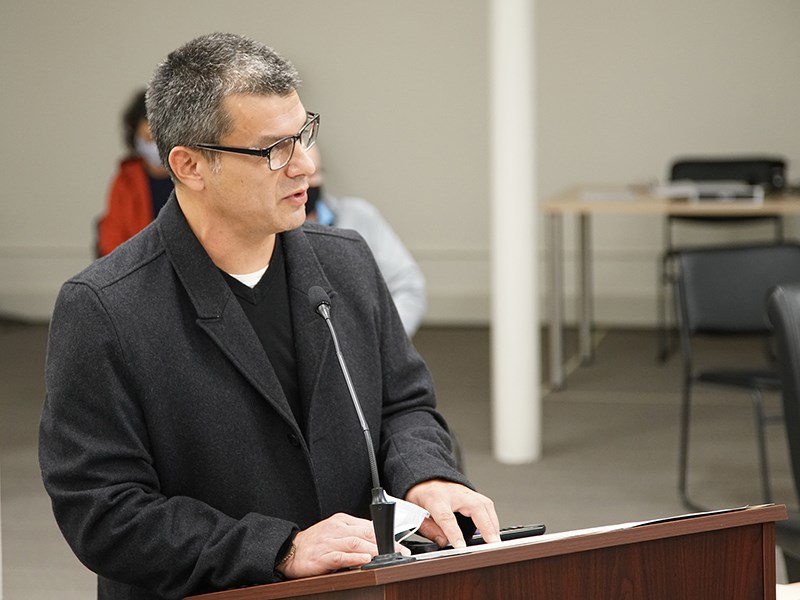 SEEKING SOLUTION: Powell River Chamber of Commerce president Telis Savvaidis made an appeal to the city’s committee of the whole to renew the business licence of PowTown CrossFit. The gym has been advised that its business licence will not be reissued in the new year because it does not conform to the zoning bylaw. Paul Galinski photo

A Powell River business is facing the prospect of not having its city business licence renewed.

Powell River Chamber of Commerce president Telis Savvaidis appeared before City of Powell River’s committee of the whole on November 3 indicating that PowTown CrossFit would be without a business licence after December.

“We stand here together in these times of economic stress brought to us by the COVID-19 virus,” said Savvaidis. “We have come here to ask for your help and your civility to stop the loss of another business in this amazing city of Powell River.

“We ask for your clarity, wisdom and foresight on how to resolve this issue of PowTown CrossFit being told their business licence will not be renewed. Perhaps some of you thought we would come in here with rapiers held high and cause trouble, but that’s not what we are here for. I humbly stand before you asking that we can resolve this issue together, because that is what community does.”

Savvaidis said he was sure with communication, a fix to the situation that has caused stress could be found. He said he was asking for elected officials and city managers to save PowTown CrossFit.

Savvaidis said a gentleman moved here about four years ago with the dream of helping get people fit and helping out the community. Savvaidis said sometimes through the stress, things go awry and they have gone awry because the owner has been told he cannot have a business licence after December.

“I’m sure through your wisdom we can find some common ground and a fix where this business could go forward,” said Savvaidis. “What that fix is, I’m not sure because I don’t sit in your seats right now.”

According to a letter from city director of planning services Thomas Knight to PowTown CrossFit owner Eddie Charlton, the city will not reissue the business licence in 2021 because it does not conform to regulations in the zone where the building is located.

The business licence states the gym is using 2,300 square feet, which is 47 per cent of the gross floor area of the building, according to Knight.

“Given this,” stated Knight, “I will be unable to reissue your business licence in 2021 unless your business area is reduced to the gross floor area of 964 square feet.”

Councillor Maggie Hathaway said she had spent time with corporate officer Chris Jackson brainstorming about what can be done with the situation. She said she did not want to outline ideas they came up with at the meeting, but she was hoping a resolution could be found.

Councillor Jim Palm said he wanted to thank the owner for what he does for the community on the fitness front for many of the area’s residents. Palm said he has been approached by a number of residents on this subject.

“The thing is it’s not a done deal by any stretch of the imagination because it’s been brought to council now,” said Palm. “I’m looking forward to hearing the report from the corporate officer who is dealing with this. Hopefully, we can get some resolution because we very much value what you do.”

Councillor Rob Southcott said he appreciates local businesses. He said he is hoping there is a resolution in play.

“It’s really important to me that we work together,” said Southcott.

Committee chair and councillor George Doubt said it sounds like Hathaway and Jackson have some plans in place to meet with the interested parties to see if the situation can be resolved.

Charlton did not want to comment on the story.