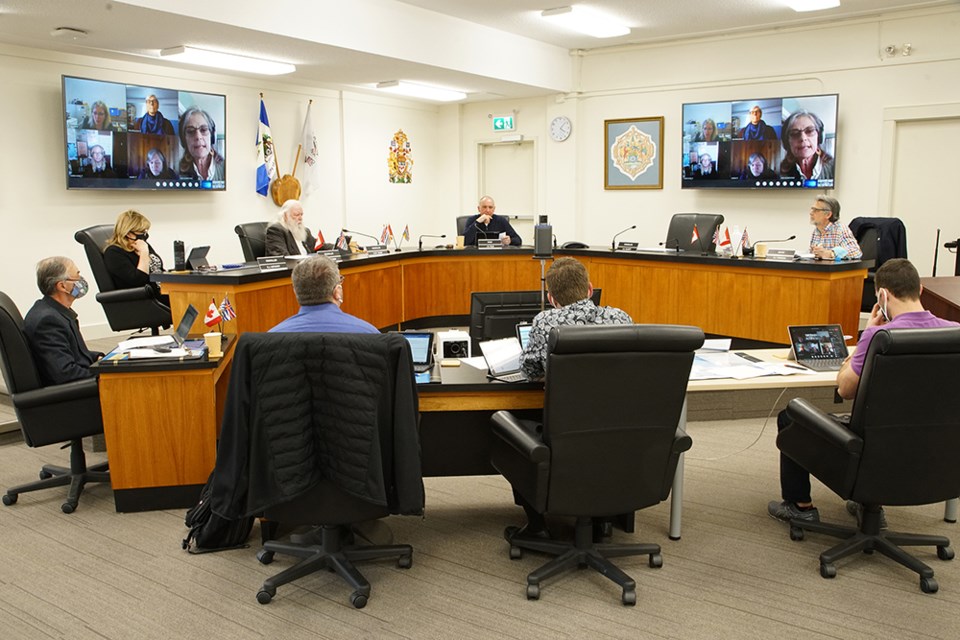 WANTS PROHIBITION: City of Powell River councillors received a request from Townsite Ratepayers Society president Diana Collicutt at a committee of the whole meeting to implement a zoning bylaw that would prevent a composting facility from being built anywhere in Powell River. Paul Galinski photo

City councillors have received another plea to keep a composting facility out of Townsite.

At the March 30 committee of the whole meeting, councillors heard a presentation from Townsite Ratepayers Society president Diana Collicutt, who said qathet Regional District (qRD) is set to award a contract to site an organics processing facility somewhere in the region that may or may not be within city boundaries.

“There may have been a lot of community consultation regarding the need for composting in Powell River, but there has been absolutely no public consultation by any level of government on a suitable location, or the design or technology appropriate for that location,” said Collicutt. “How can an informed decision on location be made without understanding what it is, how it is, how it affects everyone and what the people think about it?”

Collicutt said based on the regional district’s proposal for a composting facility, it appears decisions will be made by key people behind closed doors, who think they will most likely not be affected.

“Townsite Ratepayers Society is requesting council implement a zoning bylaw that prohibits any composting facility anywhere in the City of Powell River before an application to build one comes before council,” said Collicutt. “The city has an ethical responsibility to protect the taxpaying citizens of Powell River and its economy, and you can do this by siting it outside of city boundaries, away from residential and commercial areas. Residences in our city deserve an odour-free and pathogen-free neighbourhood to live in.”

Collicutt said the compost facility belongs in electoral areas of the regional district, away from homes and businesses, where there is room to implement buffers.

“There is no reasonable necessity to put it in city limits,” said Collicutt.

Councillor George Doubt, who sits as a qRD director, said the regional district has a request for proposals for composting of material collected throughout the region, which includes the city. He said that is going to be before the regional district on April 15. He said the presentation made at the committee of the whole meeting contains many questions, but answers to the questions won’t be known until after qRD decision-makers have looked at all proposals and come to some conclusion.

Councillor Cindy Elliott said she is in favour of public consultation when it comes to the location of a composting facility.

“I have every faith once we get to the part of choosing locations that we, the city, will have a role in providing input,” said Elliott. “I intend to carry forward all of the input I’ve received from people such as yourselves. At this point we’re not involved in a process to provide input just yet but your input is fair and I would carry that forward to that process when it happens.”

Councillor Maggie Hathaway said councillors could not move forward with anything that was not before them. She said they will have to wait until an application is before them and deal with it at that time.

Mayor Dave Formosa said the other issue is that Townsite lands on which Tla’amin Nation has indicated it wants to locate a composting facility were sold to the Tla’amin people. Formosa said when PRSC limited partnership was dissolved, certain lands came to the city and there were lands that went to Tla’amin.

“This particular parcel that’s in question, I believe, we agreed to turn over as treaty settlement lands,” said Formosa.

He said as treaty settlement lands, Tla’amin would be the government of those lands.

“We turned that over,” said Formosa. “Technically, it hasn’t gone through yet. I was under the impression it was already done but we heard that the treaty settlement lands have not gone through the process with the provincial government.

“How do we go to them and say we’re no longer going to honour this?”

He said if the Tla’amin government decides it wants to put a composting facility there after hearing from people in the community, maybe they have all of the answers and have it covered. He said he had no problem speaking to the Tla’amin legislature about the matter but he’s not going to say anything until he knows what is going on.

“I’m in your corner,” added Formosa. “I am concerned as well.”

The mayor said when the regional district awards its contract for a composting facility, he hopes it takes into consideration all of the people in the qRD. He said he is sure concerned residents have gone to the regional district to express those concerns, and they are probably waiting for an opportunity to go to the Tla’amin government as well.

Stephanie Miller, also a member of the delegation, said they have a meeting set up with Tla’amin Nation to discuss the matter.