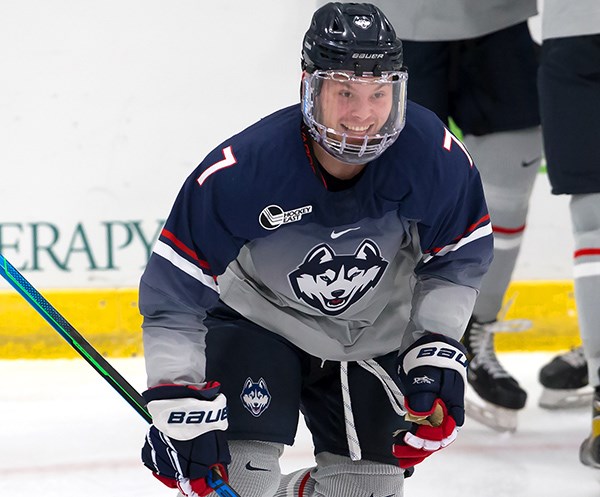 North Delta native Jonny Evans' impressive season with the UConn Huskies has him in the running for the prestigious Hobey Baker Award. Fan voting is underway right now. UConn Athletics

Jonny Evans could use a little hometown support.

The North Delta hockey standout is among the first round nominees for the prestigious Hobey Baker Award, given annually to the top player in NCAA men’s hockey. Evans is in his junior season at the University of Connecticut where leads the Huskies in scoring with 22 points in 17 games, including 12 goals. A 7-2-1 run in their last 10 games has UConn nationally ranked for the first time in the program’s history.

Fan voting for the initial round is underway until Sunday, March 7 and can be done online. The top 10 finalists will then be announced on March 17, followed by final three on April 1 and the winner April 9.

Evans came through North Delta Minor Hockey Association’s H1 program then played rep through Pee Wee before moving over to the Delta Hockey Academy. He even scored twice in a pair of call-up games with the Pacific Junior Hockey League’s Delta Ice Hawks. It was then off to the BC Hockey League and a productive junior “A” career with the Powell River Kings that earned him a lucrative scholarship deal at UConn.

His best season with the Kings was the 2016/17 campaign when Evans had 78 points in 57 games, including 36 goals. He has already surpassed his season-high for goals in the NCAA.

The Huskies continue their Hockey East Conference schedule with a pair of games this weekend against No. 16 Providence.