Group in Powell River rallies for trees on Vancouver Island 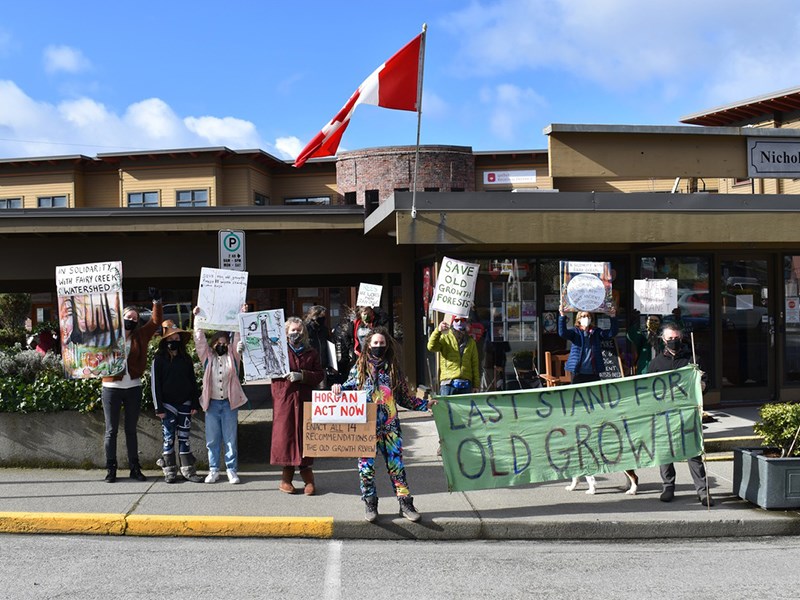 About 30 participants showed solidarity for the Fairy Creek forest blockade on Vancouver Island with signs, drums and songs, calling on the BC NDP government to act upon its promise of enacting all 14 recommendations of the old-growth review.

A rally was held in front of Powell River-Sunshine Coast MLA Nicholas Simons’ office on February 26.

According to Elena Martin, one of the event organizers, the rally was not an anti-logging-protest as some media has been describing it.

Miel Creasey, another event organizer, said da’itsx/Fairy Creek watershed is the last unlogged watershed in the San Juan River system. She said old-growth forests across the province are being depleted at an alarming rate.

“These few and far-between ancient ecosystems need our protection today, not tomorrow,” said Creasey. “Similar rallies of support have been occurring over the last week up and down the coast in support of the Fairy Creek defenders, with a call for the BC NDP to act upon their promise of enacting all 14 recommendations of the old-growth review.”

Martin said after seven months of direct action protecting Earth’s last stands of ancient temperate rainforests on Vancouver Island, the Fairy Creek blockade has been officially served a notice of civil claim, which is an injunction to stop protecting an ancient forest. The court date is March 4.

Martin said elder Bill Jones, of the unceded Pacheedaht Territory on Vancouver Island, leads the movement to keep these sacred lands untouched for future generations to come. She said he invited people to gather in front of premier John Horgan’s office with signs to stop the proposed injunction, to save the Fairy Creek ecosystem and stop road building and logging on all old-growth forest.

“As concerned children, parents and grandparents we are joining elder Bill Jones in solidarity to stop the proposed injunction and road building into Fairy Creek watershed,” said Creasey.

Participants in the Powell River rally were asked to wear masks and practice physical distancing protocols at the rally. They were also asked to bring a sign and join online.

More information regarding #FairyCreek can be found on the following website: fairycreekblockade.com.

According to a February 20 story in the Victoria Times Colonist, protesters have been preventing logging company Teal Jones’s road building and logging crews from accessing its cut block on Tree Forest Licence 46 at various access points for nearly seven months. The Times Colonist account stated a group calling themselves forest defenders has been blocking access to the Fairy Creek area, which they say contains the last un-logged watershed in the San Juan River system.

Teal Jones is trying to build access roads to an area it wants to log, but protesters state it would have adverse effects on a protected area of old growth in the valley below. The company, in its court injunction, is asking the court to authorize the RCMP to arrest and remove anyone contravening a potential order, according to the Times Colonist.

The media account states protesters say they are taking a last stand for BC’s ancient forests.

“We have had incredible support over the past six months, and we will continue to resist Teal Jones’s efforts to log this pristine watershed, the surrounding rainforest, and all other old-growth forests,” stated Bobby Arbess, who was named by the company as the defendant in the notice.

The Times Colonist account states the protest group plans on defying a potential order and is calling on others to join them at Fairy Creek to prepare to participate in a campaign of civil disobedience to defend the very last of Vancouver Island’s old-growth forests at Fairy Creek.