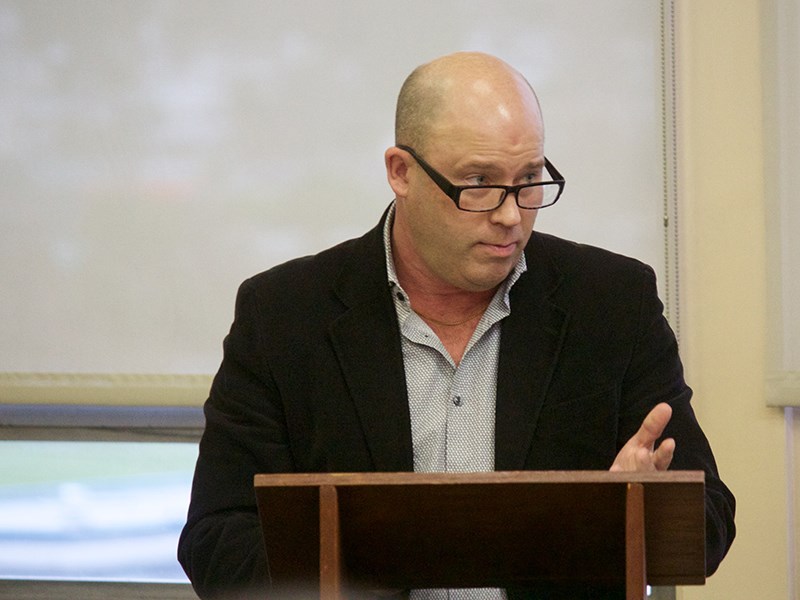 Calling the storm of controversy that has swirled around Powell River over the derelict former Inn at Westview building “an ongoing drama,” American Investments president Jack Barr appeared before the city’s committee of the whole on February 13 as the agent for the building’s registered owner Seaboard Hotels.

Barr said at the outset that the company does not have the money and cannot find any form of conventional financing or other means to tear down the building without the site being developed.

“I've said it before and I will reiterate that I, along with everybody else, would obviously like to see the eyesore of the inn gone,” said Barr, “but where do we go from here?”

The answer has evaded council for years.

Formosa said complexities of the issue have not changed, including asbestos, layers of encumbrances that lower the land value, cost of removal, ability to recoup and financing.

According to Barr, Formosa and councillor and finance committee chair Russell Brewer, the bottom line for the city and Seaboard is making the right business choice.

If the city were to pay for the building’s demolition it would cause a budget dilemma. Money would have to be borrowed, according to Brewer.

A short-term loan of five years or fewer would increase taxes approximately one and a half per cent over and above the two per cent hike the city is trying to hold to in its current budget planning, according to Brewer. He said it begs the question whether taxpayers are willing to take a tax hit.

“People have to ask themselves if this is more of a priority than more pressing issues we’re facing,” said Brewer. He added that he does not think the former inn will be an election issue in the fall.

Every angle is being considered at a time when the city has many issues facing it, according to councillor Jim Palm.

“Where we're at is not a good place, considering the cost of removal,“ said Palm. “There isn’t a win-win on the table right now and that’s the problem.”

Over the last four years, Barr said he has worked to resolve the encumbrances involving parking easements attached to the property, and he gave a litany of efforts Seaboard has undertaken. Those include environmental and hazardous material studies, WorkSafe BC issues, a structural assessment, possible use in community fire training, obtaining housing-needs assessments and meeting with BC Housing on lending for housing projects, obtaining quotes on the cost of remediation to tear the building down and enquiring with Powell River Community Futures about assistance with financing.

Barr said there is currently no financial model or business case that justifies depositing between $600,000 and $1 million “in the toilet and flushing it away.”

The fair market appraisal the city has conducted puts the value of the land at approximately $137,000, according to the city’s chief administrative officer Mac Fraser.

In April 2017, city council voted to issue a remediation order for Seaboard to tear down the building by May 31, 2017, and it remains standing.

“The order is in progress while the property owner has asked to be given a chance to bring forward a plan of action,” said Fraser.

Barr said an amicable resolution is not going to happen overnight and had some closing words for people who “don't have an inkling of the complexities around the quagmire” and suggest he should pay for the demolition out of his own pocket.

“I'm left to believe that I'm being tried by the court of public opinion," said Barr, "rather than engaging in a mutually respectful interchange."