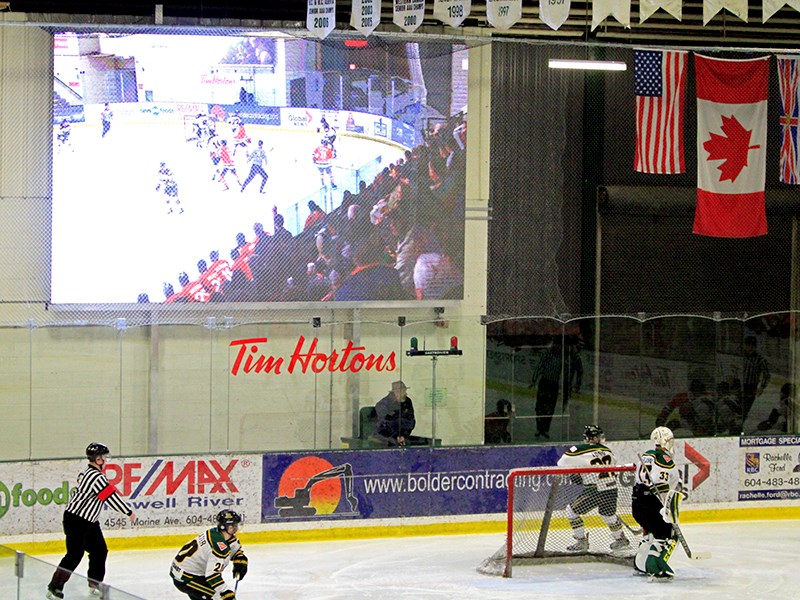 A new state-of-the-art LED stadium screen is now in place and operational at Hap Parker Arena in Powell River Recreation Complex. The system was turned on for the first time on March 10 for a BC Hockey League playoff game between Powell River Kings and Nanaimo Clippers.

“The screen is stunning; the colours are incredibly rich,” said Kings broadcaster and media relations manager Alex Rawnsley. “It's very bright and impactful for people.”

The technology has all of the bells and whistles but turning on the full capabilities of the system will be gradual.

“Our goal for Saturday night was to do 50 per cent capacity of what we can do and try to do that very well, which I think we did,” said Rawnsley.

Some fans noticed the replays were played back in very slow motion.

“We slowed everything down to about 50 per cent, so we're going to tweak that,” said Rawnsley. “We’re trying to do something very basic and grow from there. I would call it a learning experience and say this is something we can improve, add to and change for next time.”

That next time is Monday, March 19, when the Kings host Victoria Grizzlies in game three of a best-of-seven Island Division final series.

Eventually, by next hockey season, there will be four cameras set up with a complete suite of motion, graphics, video elements and in-game entertainment.

“We'll get to a point where we'll have two manned cameras and two mounted cameras behind each goal for replays,” said Rawnsley, “and eventually goal review, once we go through the accreditation process with the BCHL.”

The screen will be used throughout the remainder of the playoff season.

Total cost of the system, $137,000, was funded through Powell River Community Forest.

“The screen was about $85,000 and the remaining was to purchase the gear to run it, as well as installation costs to get everything up and running,” said Rawnsley.

The system is also intended for the use at other notable events held in the arena, including this summer’s International Choral Kathaumixw.