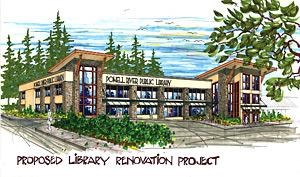 With all of the ingredients for a good book, 2014 has been the year of the library.

The year ended with the community settled, in agreement, with a plan for moving forward, raising funds and building a new Powell River Public Library. To get there, took a story of a community divided, two warring sides and the creation of a question.

The award-winning library is, for some, located in a building too small and inadequate to contain the materials and events synonymous with the community-hub facility a library could be. For 29 years the prospect of a new location has been visited. Referendum questions have been posed, and opposed.

In February, Jon van Oostveen, library board chair at the time, said, “This is not just the library their parents visited as kids, but one that is much more about social, cultural and economic development. Literacy improvement is a big piece of that.”

City of Powell River revealed in-camera meetings to discuss three potential library sites. It offered a seat at the discussion table to Powell River Regional District. Two of the three sites would be pursued: Willingdon South and Powell River Recreation Complex. The third, conversion of the old Brick building on the southwest corner of Crossroads Village Shopping Centre, was dropped due to cost estimates.

Miller Hull Partnership, LLP, contracted by the library board for the conceptual design of a library at Willingdon South, was asked to provide an estimate on the recreation complex conversion.

Councillor Maggie Hathaway called attention to process and timeline. “There are time constraints to move forward with a public consultation process and proceed with a referendum question during the local general election in November.”

The issue of public consultation reached its zenith in June with an open house to view designs for libraries at both proposed locations. Public in attendance could vote and with a rising concern about the structural integrity of the recreation complex, built in the mid-1970s, opinion swung toward Willingdon South.

But, the location issue was not over. In early July Mayor Dave Formosa suggested two empty commercial buildings be considered—the empty Super-Valu/Liquidation World and the old Brick location. At a cost of $30,000 per estimate, the city asked Miller Hull to provide estimates for conversion of both buildings.

The quotes for both buildings were similar to the quotes for Willingdon South and the recreation complex, at between $8 and $11 million.

When Miller Hull presented its results at a council meeting in September, somebody else was waiting in the wings with a surprise.

Like knights in shining armour ready to save the day, a group of local business people, with investments of family ties and finances, brought forward a proposal. It was a shocker worthy of a Hollywood movie and it was delivered just in the nick of time.

Kevin Sigouin, spokesperson for owners of Crossroads Village, proposed construction of the new library at half the price Miller Hull had estimated, together with annual income from tenants above. “The contract includes such key items as the sale of this piece of property, known as the Brick building, both the main floor and the second floor, for a total price of $4.9 million.”

The proposal led the way to a referendum question—“Are you in favour of the City of Powell River adopting Crossroads Village New Library Loan Authorization Bylaw 2391, 2014, to authorize the borrowing of a sum not to exceed $3.5 million over a maximum term of 30 years, for the purpose of building a new municipal public library at Crossroads Village at 4801 Joyce Avenue?”—and on November 15 the people spoke. The referendum passed with over 76 per cent support for the proposed bylaw. The positive move was too late for Charlie Kregel, chief librarian for the past five years, who left his position at the end of September.

Council then passed the bylaw and now the stage is set for raising funds and renovating the corner street-level suite, all under the watch of skipper and interim chief librarian Terry Noreault.