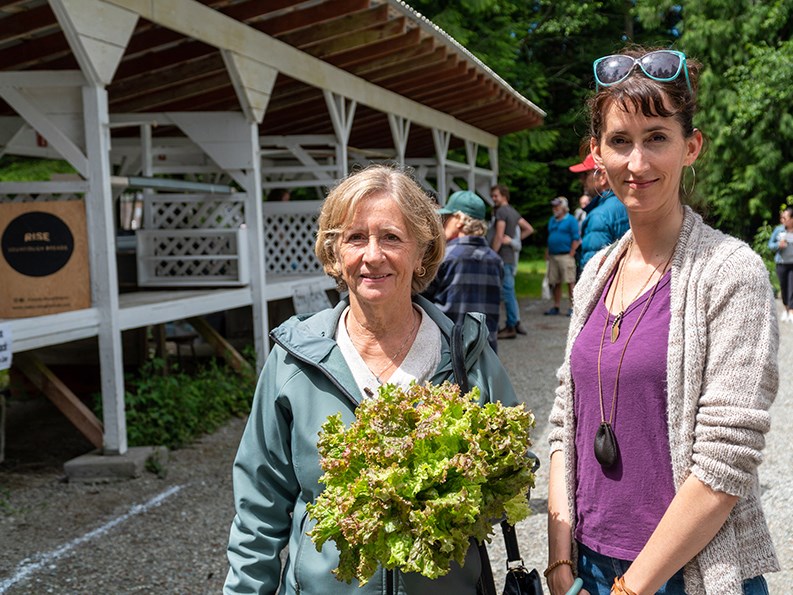 SIGNIFICANT PROGRAM: With social distancing measures in place, people including Sheri Moloughney [left] and Lisa Marie Bhattacharya were still able to come together at Powell River Farmers’ Market in 2020. Shoppers with lower incomes and local farmers benefitted from a program that distributes nutrition coupons that can be redeemed at the market.Peak archive photo

City of Powell River will send a letter of support to the provincial government at the request of the BC Association of Farmers’ Markets regarding the nutrition coupon program.

At the March 16 committee of the whole meeting, councillors reviewed a letter from the association indicating that in 2020, a total of $20,433 was invested directly in Powell River through the program.

“As a result, program participants from Powell River ate more local foods, learned about healthy eating and felt connected to their community,” the letter stated. “At the same time, the local food system was strengthened with farmers in your community benefitting from additional revenue to sustain their farms.”

The association asked the city to write minister of health Adrian Dix to help ensure the program’s continuance.

Mayor Dave Formosa said his suggestion is that the city grace them with the letter to Dix in support of the ongoing funding program for farmers’ market nutrition coupons.

Councillor Rob Southcott said at a meeting he had attended, at the family place, it was brought up how much appreciation there is for this initiative.

Councillor George Doubt said this is one of those programs that seems to be good for everybody.

“It benefits people who need food locally and it benefits local food producers,” said Doubt. “You can’t ask for anything better than that. There was an investment of $20,433 last year and that’s good for local consumers and the local farmers who create the food.”

Formosa will send a letter to the minister as requested.

Group gathers in Powell River to protest agricultural legislation in India
Jan 7, 2021 11:40 AM