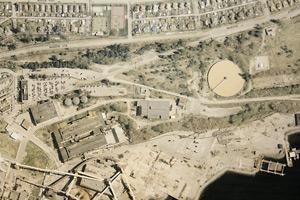 Members of the City of Powell River’s liquid waste management steering committee voted to add a risk factor to the total capital cost of co-treatment, which will be used when rating treatment options.

Richard Stogre, manager of engineering services, explained to the committee during its meeting on January 6 that the question was whether the contingency plan in the event the mill closed should be included in how the co-treatment option is rated.

Earlier in the meeting, members of the committee voted to approve a matrix revised by the joint local-technical liquid waste management advisory committee which will be used to rank candidate sites for treating the city’s sewage. Those sites include co-treatment at Catalyst Paper Corporation’s Powell River mill; the Townsite’s liquid waste management facility; and the former waste transfer site.

Stogre said Dayton and Knight Ltd. recommended that a risk factor be established for a possible mill closure. It also recommended that Catalyst be consulted to provide information on the risk.

Councillor Dave Formosa voted in opposition to the motion, which the committee passed. He argued that the worse-case figure, or 30 per cent, should be used.

Formosa also argued that another parcel of land, encompassing the mill’s old primary clarifier and extending north to the edge of the parking lot attached to the former mill administration building, should be included as another option for a stand-alone treatment facility. The city has started discussions to purchase the property where the old primary clarifier is located. The other parcel is part of an agreement-in-principle between the city and Catalyst.

While the city owns the footprint of the Townsite sewage treatment facility, the land surrounding it is owned by PRSC Ltd. There is an accepted offer on the property and widespread rumours in the community link the purchase to Aquilini Investment Group.

“What are the chances of that sale going through?” Formosa asked. “I wouldn’t bet a whole bunch of money on it, personally.”

However, if the sale does go through, it limits the city’s opportunities to expand at that site, Formosa said. He asked why the Townsite facility was still being considered as an option for a consolidated plant, “unless you go right down to PRSC and you make a deal,” he said. “Otherwise you’re shooting blanks.”

City staff will raise the issue of adding that property with the joint local-technical liquid waste management advisory committee.

Formosa also said, during a question and answer period after the meeting was adjourned, that the city was close to obtaining an agreement from Catalyst to reduce the service fee from $750,000 to $500,000 annually if the co-treatment option is chosen.