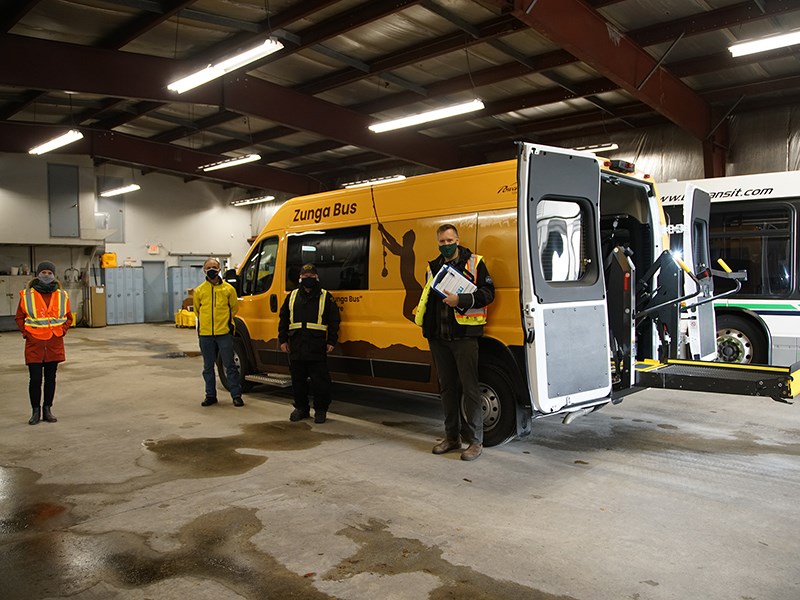 NEW SERVICE: Attending the reception of the new Zunga Bus at the city bus depot are [from left] City of Powell River sustainability planner Ana Lukyanova, councillor Rob Southcott, transit supervisor Gerry Woods and manager of transportation Cam Reed. The new on-demand bus is slated to begin service in January and will provide transit that is driven by consumers of the service using an app rather than a fixed schedule. Paul Galinski photo

City of Powell River has a new transit vehicle called the Zunga Bus.

On November 19, the city took delivery of the vehicle, which will be part of a yearlong pilot project.

“We are really excited to try out this bus with on-demand technology,” said sustainability planner Ana Lukyanova. “It has been very successful in other communities, especially small communities like ours.”

Lukyanova, in a presentation to the city’s committee of the whole in August, said on-demand busing has been shown to offer multiple benefits to communities that have implemented it. Benefits include better user experiences, shorter waiting times, increased rider satisfaction and reduced transit operator costs, according to Lukyanova. She said this results in being able to move more people with fewer buses, travelling less distance.

Lukyanova said communities the city has spoken with, such as Belleville, Ontario, had a good response from the public, which has expressed satisfaction with the service.

“People like to have that control over when they get on the bus as opposed to having to adjust their needs to a bus schedule,” said Lukyanova. “In communities like Belleville, they have seen dramatic increases in transit use because it appeals to so many more people. It’s more convenient and quicker to get on the bus.”

She said the city was fortunate to get support from Innovative Solutions Canada, which provided funds for the program, along with funds the city has provided.

Plans are for the service to be up and running in January 2021.

The on-demand bus service is driven by an app, which has been completely developed. Lukyanova said requests come from the app and go into the software that has been developed. The software will figure out the best route for the bus and it tries to pool people together as much as possible to maximize efficiency.

“The bus may deviate slightly from the route that you are travelling to pick up a couple more passengers but it moves in the most efficient way to get from A to B,” said Lukyanova.

The bus can accommodate both ambulatory passengers and wheelchair passengers. Lukyanova said the city is pleased the bus has a functional, modern wheelchair lift.

“It’s a great feature to accommodate everyone,” said Lukyanova.

She said she’s pleased that the bus has arrived and that it will be put into service in the near future.