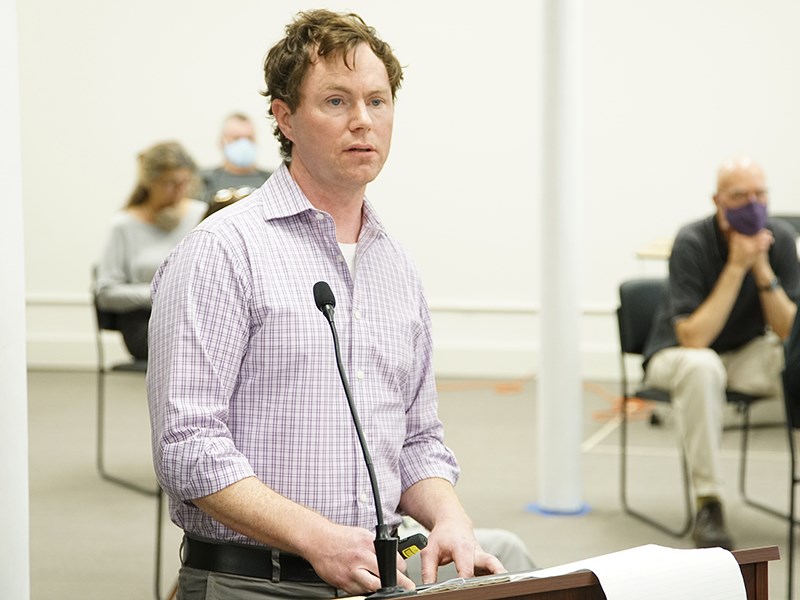 City of Powell River Council has given three readings to two bylaws to regulate sidewalk patios and parklets within the city.

At the June 24 city council meeting, manager of planning services Jason Gow outlined an initiative that would establish a framework to permit and regulate construction and operation of outdoor patios and parklets situated on public lands.

Gow said he was presented draft bylaws for council’s consideration. This included a bylaw for patios and parklets, and an amendment to the city’s fee bylaw.

Gow said in correspondence received on May 21 from the BC Restaurant and Food Services Association, challenges the industry is facing were outlined. He said the letter outlined that the industry is facing difficulties, such as economic disruption tied to the COVID-19 pandemic. The letter stated that job losses in the restaurant sector alone came to 121,500 jobs. The letter further stated that at least one in 10 restaurants have already closed forever, with permanent job losses.

Gow said the letter stated that more than 50 per cent of smaller, independent restaurants indicated they would be bankrupt within three months from the start of this crisis. He added that 70 per cent of hotels are closed and BC’s tourism sector has laid off 130,000 workers. All 197 craft brewery tasting rooms in BC are closed, reducing average brewery revenues by more than 80 per cent, added Gow.

“By and large, the numbers that are presented are devastating,” said Gow. “That’s why the association is requesting flexible, innovative and expedited patio permitting.”

Gow said city staff has been engaged in these related topics. He said patio requests had come forward from Wildwood Public House and Townsite Brewing and the city is trying to respond innovatively and quickly.

He added that on May 21, Powell River restaurateur Sarah McClean appeared before council regarding her difficulties in the COVID-19 era and council engaged the minister of transportation and infrastructure in a letter to request a temporary change of the use of parking spaces for patios and parklets on Marine Avenue between Wharf and Alberni Streets. Gow said that is a provincial highway under provincial jurisdiction and the province does not permit the use of parking spaces for parklets. He said a response to the letter had not been received.

Gow said the draft bylaw did not just limit sidewalk patios and parklets to dining but is actually expanded to allow business on a larger scale.

The draft bylaw for patios and parklets, according to Gow, aims to provide clear and consistent regulations for applicants and staff to follow. He added that it identifies three commercial precincts in the community that should be considered: the commercial areas of Townsite, Cranberry and Marine Avenue between Wharf and Alberni streets.

A sidewalk patio is where public lands become semi-privatized, where a business has exclusive use of the space to service its customers, said Gow. Parklets are free to use, meaning the public has a right to occupy the space, regardless of whether they have purchased something from a business operating a parklet.

Gow said regarding an application of fees, in his report there is a proposed amendment to the fee bylaw.

“The rationale is the receipt of an application does take time to review,” said Gow. “When public land becomes privatized, there should be some cost for that land.

“What staff is proposing as a compromise is that we include the schedule, which speaks to the fact there are fees associated, and then there be a caveat that we waive the fees for this year. In future years there would be fees associated but this year is an opportunity to try out this pilot program.”

Councillor George Doubt said he thought the concept is a great idea.

“When we get into the details of the description, between a patio and parklet, it gets harder, particularly when there are different definitions of who can have one,” said Doubt.

Councillor CaroleAnn Leishman said she was happy with all of the nuance and thoughtful approach that came together in the report.

“I’m super impressed and it captures most of the things I was considering,” she said. “There’s a real opportunity here for us to make our streets more resilient and I want to see this come forward for three readings as soon as possible.”

Councillor George Doubt said he’d prefer the vote to come back to council the following week to let the public have a chance to take a look at the bylaws but the other councillors wanted to vote on the sidewalk patios and parklets bylaw and fee amendment bylaw at the June 24 meeting. Council unanimously supported both motions.

Projects in Powell River enhance food security for individuals and the community
May 14, 2021 9:00 AM