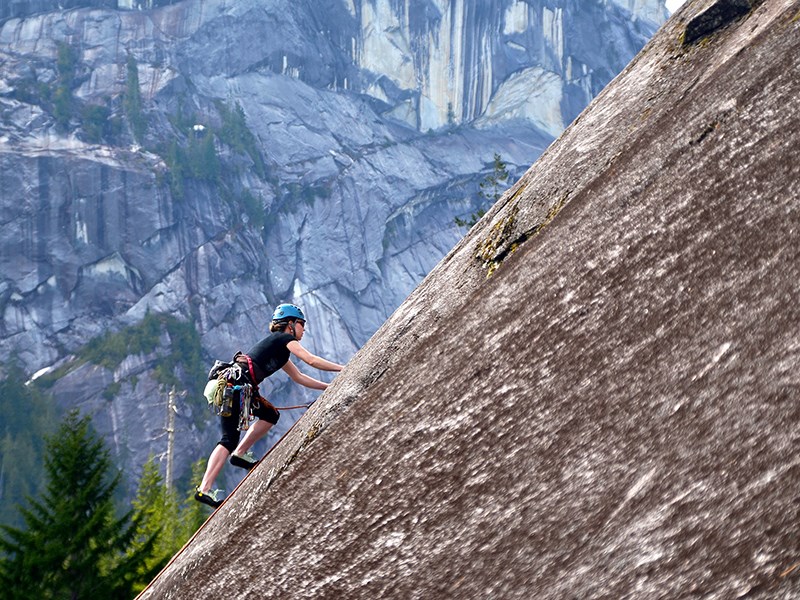 CLIMBING PARADISE: Powell River’s Eldred Valley is known as a climbing destination that offers Yosemite-esque rock walls, but a proposed power plant in the area has climbers concerned for its future. Jeremy Williams/sunshine coast tourism photo

Addressing a packed meeting of concerned rock climbers, Powell River Regional District planning committee recommended to the board that it does not support a proposed hydroelectric project on the Eldred River.

Electoral Area C director Colin Palmer, chairing the Tuesday, May 17, planning meeting, encouraged several delegations of concerned residents to send written feedback to the regional district to be forwarded to the provincial government; it will make the final decision.

“We’re not going to make the decision, but we have every right to find out what is going on,” said Palmer. “We thought BC Hydro was going to build the Site C Dam and not need all these independent power production projects.”

Powell Hydro Inc., a subsidiary of Alterra Power Corporation, applied to the province for an investigative use licence for the development of a run-of-the-river power project on Eldred River, located north of Goat Lake between Powell and Emma lakes.

Climbers’ Access Society of BC representative and local resident Christie Dionne said the proposed power station, if approved, will be located right on top of a climbers’ campsite, a recognized and established recreation site in the Eldred Valley.

“I’d like Alterra Power to know we’re there, and we have been there and recorded recreational use there since 1999,” said Dionne.

The climbers’ campsite was established by Dionne and her husband Colin, a well-known climbing advocate and Powell River Search and Rescue volunteer who died in a helicopter accident in 2011. The campground is named in tribute to Colin and is maintained by climbing community members who also do volunteer trail work to ensure climber access.

“The climbers’ camp is really special,” said Kevan Robitaille, a founder of Powell River Climbing Co-operative, the group planning to open a climbing wall in Townsite. “There’s a lot of dedication and history there, and it really should be kept as it is,”

Palmer said that over the past nine months the planning committee has received several requests for comment on independent power-producing projects in the regional district.

Palmer said the number of power lines in the region from these projects has an detrimental effect on forestry and local jobs. He added that he wants the province to not decide on these projects independent of each other, but as a whole, and look at the potential negative effect they will have on the local community.

After the meeting, climbers in attendance said they approved of Palmer’s comments.

“I was really happy with how the meeting went,” said Robitaille. “We have a fairly sympathetic regional planning committee. I was impressed, but at the same time, that’s not enough.”

Robitaille said the issue will require continued support through letter writing to the provincial government and elected officials.

“It’s a pretty big project that would ruin the place,” he said.

Speaking at the meeting, local climber Jason Addy told the committee the area in question is a nexus for backcountry use and this project would not only affect rock climbing but also river kayakers, hikers and mountaineers.

“Any power production in the Eldred Valley would have a huge negative impact on wilderness activities and therefore on tourism and local residents quality of life,” said Addy. “No one wants to travel here for that.”