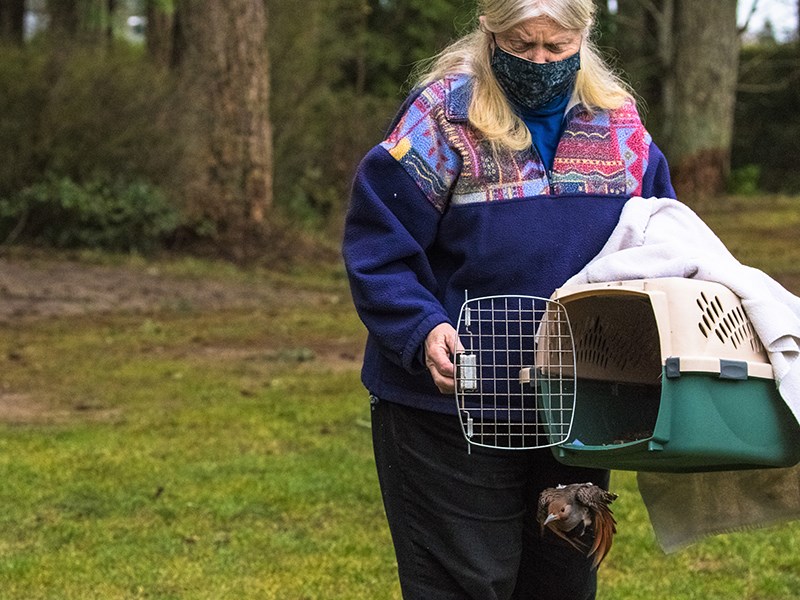 TOILET TRAP: It was a dark and stormy evening after a long day and Powell River Orphaned Wildlife Society president Merrilee Prior (PROWLS) was looking forward to sitting down and relaxing for the evening. It was not to be.

A call came in for a northern flicker trapped inside the ladies washroom at Larry Gouthro Park. Merrilee collected what she expected to use to catch the bird.

Driving across town, thinking the washroom might already be locked, she went as fast as she could and was thrilled to see the door propped open and the lights on. However, she was not prepared for how high the ceiling was, with the flicker clinging to the highest spot.

After several trips back to the car, she stood on the counter, waving a butterfly net with its handle stuck in the end of a hiking pole, which was strapped to the end of a fish-net pole, waving it at the poor flicker.

After four passes, the terrified bird was caught and safely confined to a kennel. Back at PROWLS, checked over and found to be without injury, it was left to de-stress in a quiet kennel.

The next morning the bird was taken back to the park and released, rocketing out and heading far enough away that no one was ever going to catch it again.

Flickers eat berries and seeds in the winter when they are no longer able to find the nutritious larvae of ants underground. They hammer at the soil the way other woodpeckers drill into wood. Their tongues can dart out five centimetres beyond the end of the bill to snare prey.