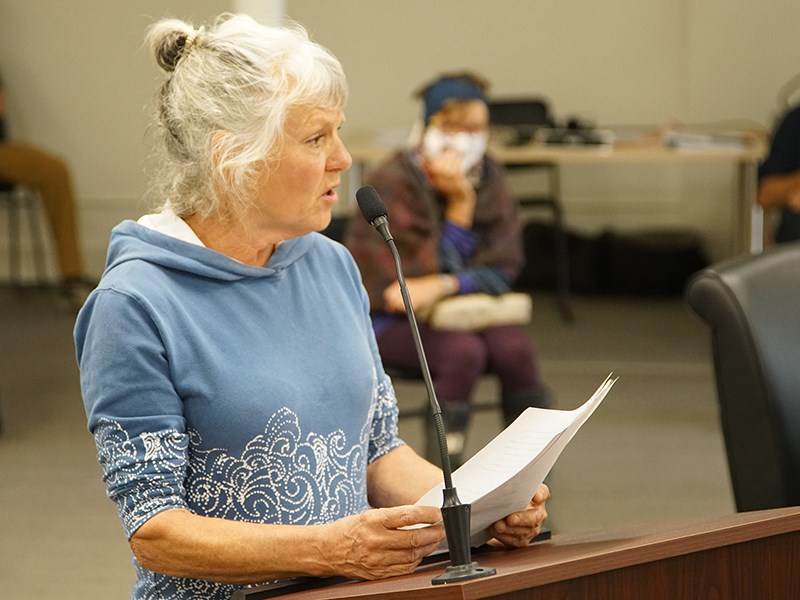 WANTS ADDITION: Powell River’s new wastewater treatment plant should feature tertiary treatment to protect marine life, according to Lesley Armstrong, who was appearing before the September 15 committee of the whole. Paul Galinski photo

A Powell River resident is calling for tertiary treatment of the city’s liquid waste.

Lesley Armstrong, appearing before the city committee of the whole meeting on September 15, told councillors, regarding the planned wastewater treatment plant project for Townsite, that: “we should not be patting ourselves on the back because we’re finding efficiencies on this multimillion-dollar project.”

“Penny wise is environmentally foolish,” said Armstrong. “There is nothing cheap about this massive project and it needs to be done right. This is the biggest expenditure Powell River will ever incur.”

Armstrong said too many federally and provincially listed species are at risk.

“The Salish Sea desperately needs our help,” said Armstrong. “Our legacy to our children and grandchildren depends on us making the best ecological decisions we can – now.”

Armstrong said that on July 28, a female orca swam south past Willingdon Beach with twin calves.

“Now imagine them migrating through the new secondary effluent plume with a discharge four times larger than before, full of CECs (contaminants of emerging concern), microplastics and contaminants,” said Armstrong. “I have not even discussed pathogens, organic pollutants, nitrogen, phosphorus and metals. Going tertiary is the globally responsible thing to do.”

“The international database on the toxic effects of sewage effluent on marine life is growing,” said Armstrong. “The Canada Species at Risk Act (SARA) registry lists species which live and migrate through the two-kilometre radius of the proposed sewage effluent plume.”

Armstrong said this is despite the April 2018 study by Associated Engineering (AE), the wastewater treatment plant’s designers and consultants, which stated: “no sensitive aquatic habitats or biota have been identified in the local study area.”

Armstrong said the sewage plume from the new treatment plant will be pumping wastewater from the hospital and from four communities into Malaspina Strait. She said scientists are finding CECs such as Prozac, hormones, painkillers, antibiotics, antidepressants, Ibuprofen, Viagra, acetaminophen, estrogen and illegal drugs in Pacific marine life.

“It does not filter out the new kids on the block,” said Armstrong.

In her presentation, Armstrong outlined communities such as North Vancouver, Kelowna, Kamloops, Calgary, Langley and Victoria, which have or are building tertiary treatment plants for wastewater.

She said this is a critical time to be making correct decisions and challenged council to invite experts in the field to address councillors and residents of Powell River in a webcast on the science and necessity of upgrading the planned secondary wastewater treatment plant to tertiary treatment.

Councillor Cindy Elliott said when councillors were learning about the planned wastewater system from AE, the issue of microplastics was discussed. She said at that time it was explained that the city could easily add components to the existing design. She said one of the problems with microplastics is that there are no standards yet and so AE thought it was premature at this time to design a system to extract them.

Councillor Jim Palm, chair of the committee of the whole, said this is a complex issue. He suggested asking for a report to come back on the subject from the city’s staff so councillors have all of the information.

Councillor George Doubt said Armstrong’s presentation was different from a previous presentation to council, which dealt with a suggestion of cost overruns with the wastewater treatment plant.

“You’re advocating for adding on tertiary treatment to the existing sewage treatment plant,” said Doubt. “That would require some redesign, which always creates delays in the construction process and adds costs.”

He said he has looked at the North Vancouver plant and the addition of tertiary treatment is going to cost $29 million.

“I would like the staff report, if we are going to get one, to look at the cost of redesigning the plant, adding tertiary treatment, and what the realistic cost of that would be, so that taxpayers could understand what they are asking for,” said Doubt. “The additional cost is something we need to be aware of. It doesn’t come without a cost and there is a significant cost to that.”

Councillor Maggie Hathaway said she did not think the city would get further funding from anywhere except out of the people of Powell River’s pockets.

Council has requested a staff report on tertiary treatment.